THIS WILL BE AN INTERACTIVE LESSON KIDS 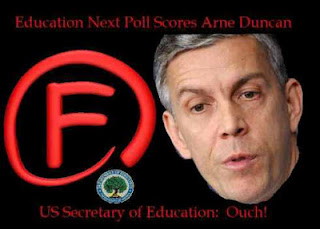 I am thinking we need some standards we can work from in our daily war against privatization. And you can't tell the players without a scorecard. It's amazing that so many of our colleagues are just waking up to the 8 foot gorilla breathing down our necks but as the apt pedagogues we are I believe it will serve us well to create a little data base for the edification of our late to the party colleagues.

For openers I am asking for help in creating a Rogue's Gallery of "reformers" we should all know and be wary of when their names are mentioned. Maybe 10 or 12 would be a good number.

Of course there's the disgraced and desperate Duke and Dauphine of Charterland, D.C. Cheating Chancellor  Michelle Rhee and her dear hubby, NBA reject and political hack Kevin -- oops I meant to put clothes on when I hugged that 17 year old naked girl in her shower -- Johnson. 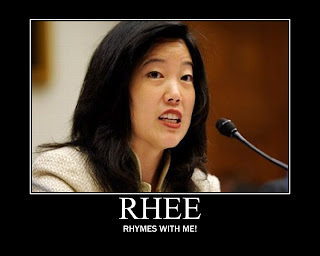 And then there's Arne "too dumb for grad school but smart enough for basketball with the Prez" Duncan who screwed up Chicago and played charter school games there with his B.A. in Sociology and when the choice between him and Linda Darling Hammond a published scholar and holder of a PhD in Urban Education at USC, the White House in true Democrat fashion went with the guy who has no educational experience whatsoever but hangs out with charter school people and feels their pain and power. Hammond infuriated the entrenched money guys who make educational decisions, there was no way they were going to put up with some union friendly intellectual.

I think we get the idea... Feel free to chime in with local and corporate entities as well. We all know a little something about Pearson and about (NOT)Democrats for (NOT)EdReform and we are likely to have heard of the charter school puppy mills also known as TFA. Then there's dear old Eli Broad and his foundation not to mention the lovely Gates couple and oh the list goes on. If you're shy about commenting email me your best work (bigseancrowleybtf88@gmail.com) and we should have a workable document with all of the players and their places ready for handbill sized distribution, downloading and posting all over downtown and anywhere else you can imagine. I am also interested in a glossary of the clever terms the deformers use one of which appears to be "grassroots" and it's always a lie. They never have any buy in from anyone except their financial backers who are trying to turn a profit on the backs of kids. Another fave is Parent Trigger which has zero per cent effectiveness in empowering parents but is very effective in handing struggling public schools over to corporate entities who can then turn a profit by pocketing money meant for kids and offering in return a substandard in most cases to mediocre at best education.  Best practices is another fun term used in charter land and one of their best is kicking out kids who will mess up their test scores with disabilities and poor behavior.

I never EVER EVER give homework so think of it as a group project, you know like all the ones you did in grad school while your professor sweated out his publish or perish article the college was forcing him to write so he couldn't really take the time to teach you anything...
Posted by Unknown at 6:46 PM