Rules for Trolls and Morans

Today this blog reached a milestone, our first troll !  Let's have a look at the high caliber or citizen who thinks teachers are overpaid and need to have their unions busted:

AnonymousJuly 2, 2012 11:09 AM
Sean, your a tool,teachers are over payed morons,time to bust your pathetic union!
ReplyDelete


Naturally the usual suspects who may have wandered across the Beringean land bridge from the B-Lo News come to mind but that's to be expected. Then again it may be a former Principal or even one of my kids. Dad ? I thought you said we'd be doing stuff all summer since you weaseled out of summer school ? You're just going to sit at the stupid computer.


Either or here's the best I could offer in response : 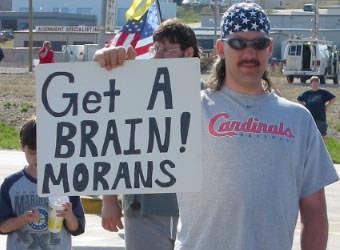 sean crowleyJuly 2, 2012 1:13 PM
Well troll, let's do a little analysis of your dizzying intellectual output shall we ? You managed to ejaculate a grand total of ONE word before committing a 4th grader's error. The correct form you are shooting for here would be "you're" the contraction of you and are which uses an apostrophe to hold the space for the a that was removed in the combining of the two words. You follow up with a comma where you might have used a period since the word tool completes an entire thought. Allegedly. You managed to get out two more entire words, respect really, before blowing it again on the devilish spelling of "overpaid." Not sure what your native tongue is but here in America we tend to go with the -aid for the terminal more than, say gluing -ed to the end of the word and hoping it stays. Major props for not spelling it "morans" as the famous Teabagger meme of the 08 election has immortalized himself in full mullet, bandana and banana hammock cut off shorts. Again the killshot is a little iffy, are you going to bust my pathetic union? Do you think you can do what James Williams and 6 whole years failed to do? Do tell, I can't wait to hear who you are and what your Scot Walkerian manifesto looks like....p.s. I let this go because your inability to communicate in the host language speaks more loudly to your ignorance than any rebuttal I could dream up. In the future, unless you are always this gifted in making a complete ass of yourself in writing, your remarks will be deleted unless you log on with twitter or facebook or something linked to prove who you are. If everybody gets to know who I am, they sure as shit are going to know who you are too. That's called holding you to the same standards I live by. I hope you have the stones to handle it but it's a safe bet you'll disappear.
ReplyDelete
Posted by Unknown at 1:29 PM