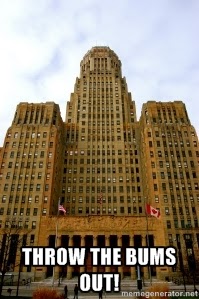 Election day was something of a deja vu for us in B-lo's Ed Scene. Back in May we had a school board election that ousted one majority and swept in another in an eerily similar manner as the country witnessed on Black Tuesday. 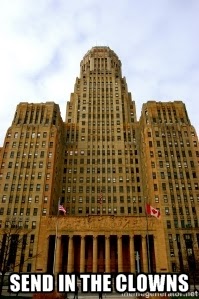 Nationally it seems President Obama was bitchslapped by an angry, impatient, potentially racially charged voting bloc that seemed hellbent on throwing Democrats out of office simply because of their association with him, his policies and the merest hint of a connection to him or his office. I'll admit I have little sympathy for Democrats in light of what John Stewart called their Chickenshit Strategy.  Their spinelessness aside I have also grown weary of these neoliberals trying to out-Republican the GOP on everything from The Keystone Pipeline to Education Reform so called. It's not that I look forward to the onslaught of privatization, pollution enabling, bank deregulation, destruction of public educations and vilification of unions that the incoming crew promises to unleash on the morons who voted them in. Not at all. I dread what's been turned loose. But I loathe and despise the do nothing Democrats who helped create the leadership vacuum wherein the GOP and its operatives could stand up on their hind legs and howl their way into office. Pissed off voters headed to the voting booth with an anybody but you mentality did not appear from the ether. They were spawned and tweaked and agitated and ignored over and over again until they eventually morphed into the mindless fuckyoubots who scribbled in the fuck you circles and slammed their little ballot into the computer with a grimace and a grunt.

Here in B-lo we endured a similar dynamic with our own Board of Education election in May. The prevailing majority of last year and many years previous was made up of African American women, affectionately known as The Sisterhood by one of their loudest critics who now sits alongside their remnants on the board. Carl Paladino couldn't get out of his own way when he ran against Andrew Cuomo for Governor. His love child, hushed up for some 10 years, emerged from the shadows, his racist, perverted emails were handed over to all the right sources (some say by the staff of his cousin in law Congressman Brian Higgins.) Carl completely lost it one night on the campaign trail and threatened Fred Dicker of the NY Post saying "I will take you out." In short he was a train wreck whose machismo played well in South Buffalo but not so well in parts of the state where he couldn't walk in and buy drinks for the house.  But like any other broken clock Carl had his moments, especially when it came to The Sisterhood and their endless repertoire of shiftless appointments, inexplicable dismissals and a seemingly interminable ability to treat themselves to conferences and perks and catered meals all on the taxpayer's dime. When Amber Dixon was working as Interim Superintendent after James Williams was finally run out of town, it was common knowledge that the board majority had no plans whatsoever to allow her to remain in the job. Furthermore it was also repeated as least once by a fellow board member at the time that there was no way in hell they were going to allow a white woman to be Superintendent. And they didn't -- in spite of the fact that Dixon was a local who'd come up in the system, knew the system, its strengths and weaknesses and had a plan on where to start undoing their boy Williams' damage. The Sisterhood sent her packing and brought in Pamela Brown, PhD Harvard, who dithered, hid, lied, colluded and was eventually run off same as Williams after reportedly writing all of her own letters of recommendation which she was to present to future employers as though board members had penned them. Without spending a lot of time with all the days and ways of the Sorority Majority's manifest misdeeds let's just say they polluted the air, land and water with their antics and truthfully set the stage for anyone to come in and "trow da bumzout!" Well, not just anyone, but you get the drift.

Sadly, the so called White Knights of Buffalo's Board of Ed are exactly that. If not royalty, they are used to life at court and being surrounded by lackeys who do their bidding and taste test their drinks. On Board of Ed election night their official newsletter aka The Buffalo News reported with fawning admiration how freshly elected member, Larry Quinn, former part owner of the Sabres was sipping wine and snorkeling shrimp at an elevated table in Bacchus wine bar, chatting with local developer/charter operator Frank McGuire who also happens to be Paladino's partner in the charter that used to be Holy Angels School. Coincidence? James Sampson another member of the Caucasian Caucus as I will dub the pale knights, happens to be the Vice President of West Buffalo Charter School where Paladino is also the landlord. Are you starting to hear them banjos yet boy? It's gettin just a hair incenstuous if ye gather my drift.  And recently Paladino gave a little speech were he promised as a sitting board member to a group of local businessmen that he was going to dissemble the Buffalo Public Schools, promote charters, hand out vouchers to private schools and essentially do everything in his power to end public education as we know it. Yes he said this as a board member who leases properties to no fewer than 3 charter schools currently with one for sure and another likely in the pipeline.

Yesterday I was on the twitter and I noticed a tweet directing readers to a blog written by one of the Board's former majority. While I agree with her message about Paladino and the dire outlook for Buffalo's schools I have a really hard time feeling too bad for her or any of her remaining holdovers from the old Majority. Here is her blog and this is the comment I left for her:

Unfortunately, the board's last majority so thoroughly enraged voters with a litany of shiftlessness, terrible hirings and the persistent appearance of anti white bias that you created the environment where Paladino and his privileged white cadre could breeze into office. He couldn't have come to power without your help.

I kind of think they deserved it more than Obama did but I'll reserve my tears for some worthier cause, like the men's room running out of paper hand towels. It'd be different if they simply ended their own careers by pissing off the meager percentage of citizens who vote in school board elections. But in reality they have gambled with the future of public education and in losing they've handed it over to the rich white guys all for the sake of hiring their pals and pocketing the petty rewards to be gotten from abusing the public trust. I hope it was worth it ladies.
Posted by Unknown at 8:06 PM