Here is what our local union President is sending out to us in the email :


MEMO TO:    All Buffalo Teachers

The end of the school year, while often eagerly anticipated, is a very busy time.

However, if you could just take a few minutes (before or after school hours) to sign the petitions to get Zephyr Teachout and Tim Wu on the ballot in the Democratic Primary for Governor to challenge Governor Cuomo, it would send a strong message to the Governor – “Our schools do not deserve your “Death Penalty”.

Petitions and self-addressed stamped envelopes have been sent to each delegate chair.

Every signature is important. If you are able to circulate a petition in your neighborhood, you can make copies.

We need them back by July 1.

Thank you as always for you solidarity and support. You are the very best.

And here is what our fearless NYSUT rep Mike Deely is telling his Facebook friends of which I am not one : 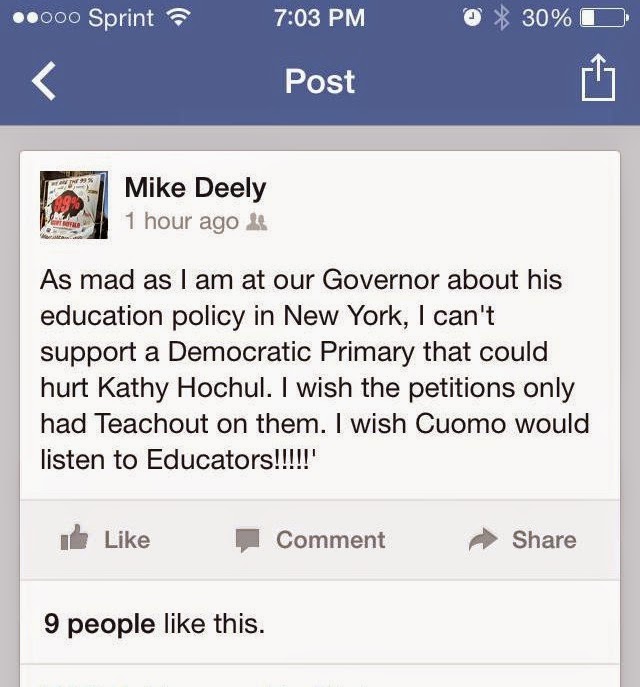 You are educated, discerning types or you wouldn't be reading this blog. We get the President in full pom pom and bullhorn mode up above and then we get the "I'm so sorry but it's not you, guys it's me." from the NYSUT guy in the next breath. Is this like the Sunday morning bookies on the radio during football season who give the guaranteed winner as Tampa Bay +3 to the first 200 schmucks who call and Green Bay -3 to the next 200 schmucks who call? Are we the schmucks who follow this kind of bullshit "leadership?" Are we supposed to think these guys don't talk?

I messaged Deely to try and get him to throw some support to a protest when Tisch and Bennett were brought to School #45 with Sean Ryan. The party line was that Ryan was going to prove that #45 is not a "failing school" and why should be protest that? Well it's since been revealed that there is a new scheme afoot to get rid of ESL people and turn you and me into ESLers with a few short in-services. Kind of a "TFA cum ESL" if you will. Seems there was more to that visit than Sean Ryan saying "Yeauuuh, In Your FACE Madame Tisch!" So we didn't want to hurt our good friend Sean Ryan's feelings cause after all he belongs to the same party as Andrew Cuomo. And now we don't want to hurt Kathy Hochul's feelings either with any unseemly union behavior since she too is a proud member of the party who wears the Jackass. It's pretty clear to this union member that my well being, my livelihood and my job security are not the concern of my union representatives. Protecting Kathy Hochul's delicate sensibilities is far more important than supporting  Zephyr Teachout's Quixotic candidacy in a truly brown bag and grassroots primary against Andrew Effing Cuomo. In case you've been Rip Van Winkling lately Andrew wants to destroy public education and replace it with hedge fund owned charters run by his billionaire campaign donors from Democrats for Ed Reform and other nefarious and reptilian bodies. He is an enemy of unions, of teachers, of public schools and of fair and valid evaluations of same. He came to my home town and used the term Death Sentence for what he and his pals term "failing schools." Yet we can't find a union person stand up to him. Go figure. It must be cool to have such friends. I really hope I didn't hurt any Democrats' feelings with this post. They really are sensitive.
Posted by Unknown at 9:53 PM