They Murder to Instruct

Somewhere in the middle of my UB English Lit experience I was clobbered with that famous Wordsworthean spitball from The Tables Turned :


And if it was ever worth the time I spent arguing WW's pro-nature, anti-overintellectualizing worldview I think it becomes quite valuable in today's Educational paradigm when we take a good hard look at the "reform' crowd who are determined to prove that pedagoguery is not an art but an exact science.

Consider this piece I tripped over while trying to make sense of twitter some 5 years after starting an account. It's written by Mark Naison, who. ironically was also posting honest to God sensible edu stuff on that idiotic Buffalo Teachers for Change site.  I have it linked and selected a salient paragraph or two for your sampling :

... This is why it is frightening that business leaders have taken charge of education in the United States, because the only things they take seriously as motivation are material rewards and fear of losing one's job or business. They are convinced that schools in the U.S. can only be improved if a business-style reward-and-punishment system is given primacy. They love the idea of performance evaluation based on hard data (with student test scores being the equivalent of sales figures and/or profits), of merit increments for those who succeed, and the removal of those who fail.
Because they fail to understand how much of a teacher's job satisfaction comes from relationship building and watching students develop over a lifetime, however, they create systems of evaluation which totally eliminate such experiences because they cannot be reliably measured. The consequence, sad to say, is that measurement trumps real learning. The inevitable results are the massive demoralization of the teaching force (teacher morale is now at the lowest in recorded history), a narrowing of the curriculum to constant test preparation, and a "brain drain" of talented teachers from high-poverty schools to those located in more prosperous neighborhoods... 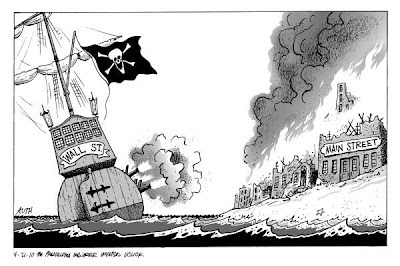 It reminds me of the time I heard Mr. Phil the Tee Vee Shrink explaining his view of the psychology. To hear him tell it everything could be reduced to a numeric solution and there would be a winner and a loser. Schmuck, I think is what I heard myself saying when he finished his homespun soul fixin spiel. I received a new student a while back who refused to speak with anyone, adult or kid and essentially sat and stared when not doing the independent tasks assigned. After 6 months of non communication and angst the kid connects with a new therapist and begins making small talk, bringing a lunch to eat in the therapist's office and engaging in inside class jokes by resetting a computer desktop to a topic the kids all find hilarious. Any teacher gets the huge strides here. But if this kid doesn't make the AYP it's all for naught and the teacher is a bum, the kid a throwaway. That's the kind of toxic bullshit these people want to inflict on us and our profession. They think they know better because their idea of success can be bought, paid for, driven, smoked, eaten, lined with marble or flown. And somehow these cretins have crept up to the gate with their numbers and rulers and are poised to ruin education with the same reckless abandon they showed in wrecking the financial markets, the real estate markets and the world economy in general. When they do who is going to bail them out ? I think we have a better solution and that's keeping them at bay until their results come in from all the places they have infiltrated. It's not good and they are not good. I am open to better ideas.
Posted by Unknown at 5:00 AM