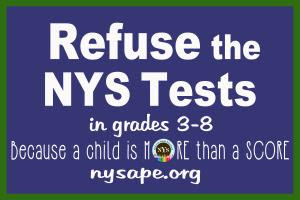 I am loathe as the next guy to flog the dead horse of why Buffalo's Opt Out numbers are all but non-existent but in the words of The Dude, new shit has come to light, man. It's rare that two posts overlap as mine have this past week but I'll try not to pat myself on the back too hard in reviewing the nexus between a sixth grade  kid being denied admission to City Honors because he opted out of NY State assessments and Dr. Nevergold's semi-rhetorical query as to why Opting Out rarely happens in Buffalo Schools.

It's already been pointed out that NYSED Commissioner Elia and Commissioner King before her have a staunch ally in Buffalo's parent group of record, the DPCC. Their bond is so strong that Mr. Radford of DPCC was hand picked to sit on Governor Cuomo's latest stacked deck of ed reformers and pro Common Core agitators who supposedly reviewed the state of public education, testing and APPR in the Empire State. In short, any parents participating in the DPCC in an attempt to have some influence in their kid's education are encouraged to have their kids take the tests, love the Common Core and blame Buffalo teachers and their union for pretty much any and all of the district's shortcomings.

That aside, I realized as I scrolled through the comments under the two articles where I posted them on social media that the kid being kept out of City Honors for refusing the test is not an isolated case but one of many who were punished for refusing to participate in a test Governor Andrew Cuomo himself has described as "meaningless."

In another case a parent commented that the child's Principal -- unnamed -- advised her in a patrician and condescending manner "Not to use her child to make a political statement." What I find really ballsy about this remark is that the Principal in question,  -- and it's tragic that we have so many of these spineless wombats in B-Lo with "Principal" plates on their desks that nobody will even be able to guess who it is -- somehow failed to see the full scope of this "political statement" which has already been made with the help of cowardly politicians beholden to hedge fund donors and henhouse foxes like Elia who've infiltrated education to serve as the handmaids of corporate ed reform's greed fueled agenda.

Politicizing education and using kids as pawns is the statement we've been trying to push back against for the past decade plus. It didn't spring out of thin air with some random Mom deciding Johnny isn't taking the test because she wants to "make a statement."

In special ed college we were taught about the ABC of a behavioral situation:

Sadly, Principal Invertebrate fails to include a particularly provocative Antecedent into his equation and instead strips the situation of its proper context, excusing the ed reform movement of imposing this assault on public education while accusing the mother of being the one with some irrational political axe to grind. He's absolved the real culprits of starting this fight and demonized the mother for trying to defend her kid. In the sad sorry light of day a parent has almost no way to respond to all of the above.

The only way, I repeat for emphasis, THE ONLY WAY parents have found to respond to all of the above is by refusing to participate in a meaningless, high stress activity held in April that's so far out of wack that it even has its own protocol for administrators explaining in full detail how to proceed when a child vomits on his test paper. In case you're wondering the test paper in question -- vomit and all -- is to be loaded into a ziplock bag and sent along to Albany with the rest of the papers. Maybe the Regents Fellows have a special process for correcting them?

The fact that NYSED had to develop an official protocol for this scenario should tell us all we need to know about whether or not April Foolishness is anything more than state sanctioned and state mandated child abuse. A parent sheltering her kid from such abuse is not making a political statement, she is demonstrating sound skills as a mother. It's criminal that she should be forced to protect her child from abusive policies and abusive adults claiming to be in the business of education.

No kid should be punished as so many I read about were punished because they and their parents made the decision not to participate in state sanctioned child abuse that serves no educational purpose whatsoever. In politicizing education, guinea pigging our students and weaponizing these meaningless tests to exclude kids from criterion schools and to fire teachers over speciously low test scores, the agents of corporate education reform have declared war on the rest of us.

The only answer now is not to stop Opting Out but to increase it exponentially. No scores, no exclusion from Criterion Schools. No scores, no receivership schools. No scores, no bogus APPR using them as 50% of a teacher's evaluation. They fired a bunch of first shots. We need to respond with the only weapon we have that will work: REFUSAL.
Posted by Unknown at 11:37 AM