Ok fellow pedagogues our $1,000,000.00 guy in Albany, State Senator Marc Pannepinto, won't be heading back for another term. Not because he's been voted out or will be voted out, I guess the world will never know. He announced in a sweaty press conference on Tuesday that he's not running and I guess you can take your pick from the handful of unconvincing reasons he offered:


In what appears to be a tangential development political wunderkind and UFT prodigy Danny Corum's been jettisoned in what's being described as a "confidential personnel matter." Corum's name came up earlier in the week when it was mentioned that he's on loan from United Federation of Teachers and there was some question about a legal issue involving his employment and/or payment. And in what strikes me as the most bizarrely nonchalant bit of commentary you're likely to hear tossed out in a Tuesday press conference during rush hour, Pannepinto related that someone is saying a rape occurred in his residence while he and his wife were out of town at a volleyball tournament with one of their children. There had been a story about Buffalo Schools officials trying to track down some social media chatter about underage drinking at the Pannepinto house but nobody was mentioning the R word.

Where does all of this put us as NYSUT and BTF members? Are we back to square one with our guy out of the running or are we further behind square one and out the million bucks that was poured into Pannepinto's campaign and even into Kevin Stocker's as I recall when it seemed desirable to destabilize Mark Grisanti leaving an eminently beatable Stocker as the last man standing? Somewhere in all of that came the infamous battered woman ad attributed to NYSUT operatives essentially making the claim that Mark Grisanti wasn't terribly concerned with the plight of domestic abuse victims. I won't rehash the entire sordid spectacle but Poloncarz and everyone else got up on their politician's soapbox to denounce those shiftless lousy teachers who'd create such a distorted and unseemly ad. 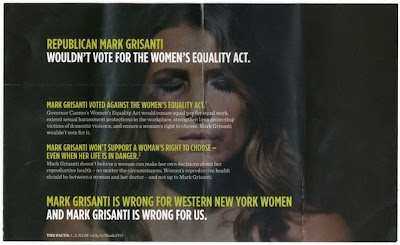 The Buffalo News wet themselves with glee and every teacher hating, union hating cyborg on the eastern shore of Lake Erie emerged from his hole in the ground to spit at a teacher. Teachers they said should adhere to a higher standard. Teachers should set a better example. Ad nauseam.  It was a maddening position we were put in by the people we trusted to use these funds and win elections. And I guess if you want to count W's and L's they could say in the end "We won so get over it."

And I guess we did but here we are all over again. What precisely did we gain with that sizeable contribution to the Pannepinto campaign? Two piece of legislation Marc wrote were made law. One dealing with 18 mile Creek being designated an inland waterway and another related to a parkland in Hamburg. What I recall about Pannepinto's term is when Catherine Collins the Regent who displaced Regentus Flatulentus Bennett started chirping about mayoral control of the Buffalo School Board
and before we knew it Pannepinto was telling the media that he was going to introduce the bill. Maybe the idea of allowing Mayor Byron Squarepants to add two members to the Board struck someone as a good compromise. It failed to impress any of the rank and file grunts I talk to in the course of the week as a million dollar idea. I thought he was supposed to have our backs? people wondered aloud. Why the hell is he getting behind this mayoral control nonsense?

Lest we forget candidate Pannepinto came to us with a conviction for voter fraud. It stemmed from saying he'd witnessed voters signing nominating petitions which apparently he hadn't. Not Murder-1 mind you but enough of a red flag that people asked at the time why we'd want to get involved with someone who had a voter fraud conviction. The greater minds of the Ars Politico prevailed and it was if we reluctantly agreed to ignore the odor of dog crap on our guy's shoes. Then came the Grisanti ad and another ad only marginally less ridiculous but it managed to misspell the opponent's last name and spelled "looses" when they meant to say "loses." Let's say the volume of dog shoeshit got turned up considerably. And between his specious claims of undoing the GEA and the Mayoral Control Bill's introduction we had all of the windows open and were in search of a fan and some Ocean Breeze Glade. By the time the Ides of March rolled along there was no living with the situation. Our guy was bailing and acting shady, answering questions in lawyerese. No, he says, there is no investigation. Hmmm but there now appears to be an investigation.

Before we put all of our money on the Democratic Party's next dark horse candidate maybe the rank and filers who fork out for VOTE COPE might be allowed to have some input? Or would that just be too much like a Democracy?
Posted by Unknown at 8:37 PM