The Unbearable Heaviness of Inevitability 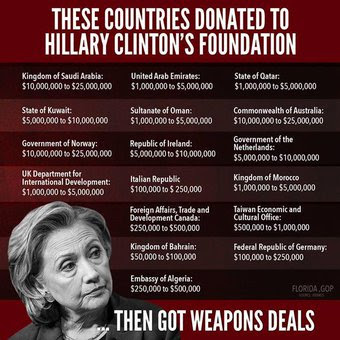 Just so you know I'm not slapping up some unfactcheckable meme folks, here's a little follow up from that pesky David Sirota who seems to have his thumb on the pulse of a lot of things informed teachers should also know about. When the AFT and NEA threw their endorsements to Hillary Clinton with what amounted to zero input from rank and file dues paying (for now) members, this is just one of the egregious red flags many of us would have cited as grounds for endorsing mud ahead of HRC. Bear with me please as this isn't a fortune cookie sized post. In honor of Perdido St. and RBE I am going to go long on this one for the sake of making a point. Regrets to the retired teacher who told me in all earnestness how much she loved my blog but suggested I make the articles shorter. In the words of William Blake, "That which can be made explicit to the idiot is not worth my care."


Even by the standards of arms deals between the United States and Saudi Arabia, this one was enormous. A consortium of American defense contractors led by Boeing would deliver $29 billion worth of advanced fighter jets to the United States' oil-rich ally in the Middle East.

Israeli officials were agitated, reportedly complaining to the Obama administration that this substantial enhancement to Saudi air power risked disrupting the region's fragile balance of power. The deal appeared to collide with the State Department’s documented concerns about the repressive policies of the Saudi royal family.

But now, in late 2011, Hillary Clinton’s State Department was formally clearing the sale, asserting that it was in the national interest. At a press conference in Washington to announce the department’s approval, an assistant secretary of state, Andrew Shapiro, declared that the deal had been “a top priority” for Clinton personally. Shapiro, a longtime aide to Clinton since her Senate days, added that the “U.S. Air Force and U.S. Army have excellent relationships in Saudi Arabia.”

These were not the only relationships bridging leaders of the two nations. In the years before Hillary Clinton became secretary of state, the Kingdom of Saudi Arabia contributed at least $10 million to the Clinton Foundation, the philanthropic enterprise she has overseen with her husband, former president Bill Clinton. Just two months before the deal was finalized, Boeing -- the defense contractor that manufactures one of the fighter jets the Saudis were especially keen to acquire, the F-15 -- contributed $900,000 to the Clinton Foundation, according to a company press release.

The Saudi deal was one of dozens of arms sales approved by Hillary Clinton’s State Department that placed weapons in the hands of governments that had also donated money to the Clinton family philanthropic empire, an International Business Times investigation has found.

Under Clinton's leadership, the State Department approved $165 billion worth of commercial arms sales to 20 nations whose governments have given money to the Clinton Foundation, according to an IBTimes analysis of State Department and foundation data. That figure -- derived from the three full fiscal years of Clinton’s term as Secretary of State (from October 2010 to September 2012) -- represented nearly double the value of American arms sales made to the those countries and approved by the State Department during the same period of President George W. Bush’s second term.

American defense contractors also donated to the Clinton Foundation while Hillary Clinton was secretary of state and in some cases made personal payments to Bill Clinton for speaking engagements. Such firms and their subsidiaries were listed as contractors in $163 billion worth of Pentagon-negotiated deals that were authorized by the Clinton State Department between 2009 and 2012.

The State Department formally approved these arms sales even as many of the deals enhanced the military power of countries ruled by authoritarian regimes whose human rights abuses had been criticized by the department. Algeria, Saudi Arabia, Kuwait, the United Arab Emirates, Oman and Qatar all donated to the Clinton Foundation and also gained State Department clearance to buy caches of American-made weapons even as the department singled them out for a range of alleged ills, from corruption to restrictions on civil liberties to violent crackdowns against political opponents.

As secretary of state, Hillary Clinton also accused some of these countries of failing to marshal a serious and sustained campaign to confront terrorism. In a December 2009 State Department cable published by Wikileaks, Clinton complained of “an ongoing challenge to persuade Saudi officials to treat terrorist financing emanating from Saudi Arabia as a strategic priority.” She declared that “Qatar's overall level of CT cooperation with the U.S. is considered the worst in the region.” She said the Kuwaiti government was “less inclined to take action against Kuwait-based financiers and facilitators plotting attacks.” She noted that “UAE-based donors have provided financial support to a variety of terrorist groups.” All of these countries donated to the Clinton Foundation and received increased weapons export authorizations from the Clinton-run State Department.

Any politician who takes money from a government with this amount of blood on its hands then facilitates weapons deals with them is nobody a teacher's union needs to be in bed with. Remember about the time Weingarten was catching holy hell for lining up with Al Sharpton to attack the NYPD she quickly threw herself into the philosophical hunt for the kidnapped Nigerian school girls? Before I blocked her I saw her tweeting about it. Strange how things come around isn't it that her choice for President is cool with accepting cash and making deals with people who are also giving cash to the very same terrorists who kidnapped those poor school girls. The other day the Chicago Teachers Union withdrew its $3/4 of a million out of Bank America to protest the debt swaps Bank America advised CPS to engage in which have cost the district over $500 million. See how that works Randi?

If you realize mid waltz that your partner reeks of brimstone and has a pair of horns sticking out of his head you do well to end the dance. CTU decided they'd danced with the devil long enough and decided to take their business somewhere else. It's what most of the teachers I talk with daily say about the Hillary endorsements too. Nobody voted for it or supported it and the tiny handful who insisted on it are going to be held accountable for their chicanery if not now then later.  It's called doing the right thing. And if Randi and Lily want to race around New Hampshire in their "Union Hacks for Hillary" hoodies God Bless them cause they sure as hell won't be doing so with the blessing of the unwashed rank and file.
Posted by Unknown at 12:02 PM