Carl Paladino's "Hermanifesto" Or Why Blacks Are Such a Disappointment

Will "Herman" please step forward and identify himself? Many of us were touched by his racially incisive email to Buffalo Board of Ed member Carl Paladino who shared it with several hundred friends and admirers on the Facebook. If you haven't had a chance to peruse Herman's self hating and jaw dropping missive, do have a look for your own self. One of Carl's FB friends finds it to be full of "wisdom and truth." 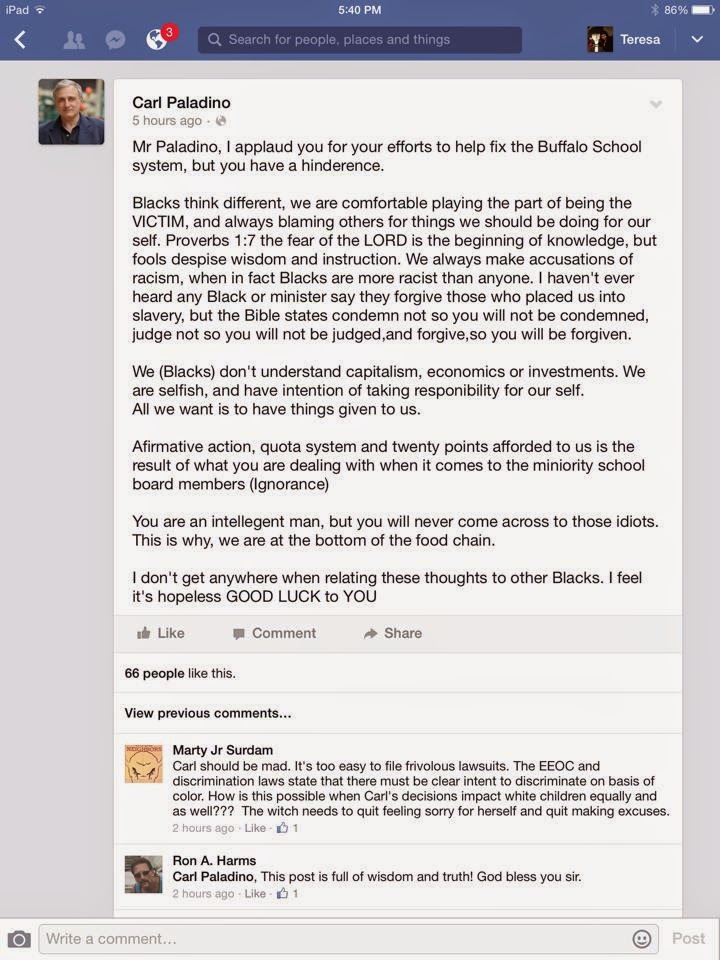 Paladino, coincidentally, is currently waging war against a group of African American women board members and the board legal counsel, who is also female and African American. They are at this point trading legal spitballs. How serendipitous for Carl that a semi-anonymous ironman errrr I mean Black man should emerge from obscurity to unleash an anti Black screed  even the Klan would be proud to claim. "Herman"  No Last Name Given explains "Blacks don't understand capitalism, economics or investments." Yeah I guess Dr. Dre, Jay Z, Michael Jordan and every other financially successful Black person all the way back to  Madame C.J. Walker have all been the beneficiaries of some murky Socialist affirmative action program that creates token millionaires. "Herman's" body of work speaks for itself. Sounding not a little like Uncle Ruckus from Boondocks our fearless self hating Black man praises Carl's intelligence, laments Carl's and his own lot in being stuck dealing with Black idiots who earn nothing, achieve nothing and loaf around in between handouts feeling sorry for themselves. The message of this thing is mind numbingly racist. It offends on so many levels one is hard pressed to find a starting point. But just for the sake of fried chicken and watermelon let's just suspend our disbelief and pretend that Uncle Ruckus-Herman actually did pen this epistle and send it along to Carl Paladino, CEO of Ellicott Development Inc. and member of Buffalo Board of Education. Upon receiving said missive, board member Paladino read it over, looked at it again and made a decision.

He had to have thought about the contents for a few minutes at least, weighed the message conveyed therein then made a decision. I'm pretty sure if most people I know got such a thing sent to them they'd delete it. Anyone who'd reproduce this thing for public consumption would be doing so to expose a weird racist assault on Blacks allegedly written by an alleged Black person who has no use for his own race. The message would be Hey look at this crazy racist piece of crap someone sent me pretending to be a disgruntled Black guy who supports Carl Paladino!

Carl Paladino, however, attaches no such caveat to the Hermanifesto. Rather than frame the thing as an obvious piece of letter narration fiction he presents it "as is" with a perfectly straight face and no whiff of irony.  Paladino simply lays it out there for all to admire as an example of his support in the Black community and sympathy to his dilemma in being forced to associate with the likes of the female Board Minority whom he manages to call "idiots." The term "idiots" curiously echoes Carl's own word choice in his email exchange with Dr. Orfield where he says something about "idiot less" in his own inimitable Paladinoese. In the world of "Herman" we are presented with an urban landscape peopled with lazy, shiftless Blacks who whine and demand handouts from hard working successful white people like the CEO of Ellicott Development.  Fortunately for the CEO and board member, not ALL of Blacks are lowlife, sniveling moochers. There's at least one Black guy who can quote a scripture, spot his own race for the disappointment they are and offer support and solidarity with his embattled and misunderstood hero, Carl Paladino.    Ahem.

I wonder if "Herman" has ever had a gander at the cache of emails released to wnymedia.net when Citizen Carl was spending $10 million of his pocket money running for Governor? There wasn't a lot of love for the black community in those emails. This one still takes my breath away years later: 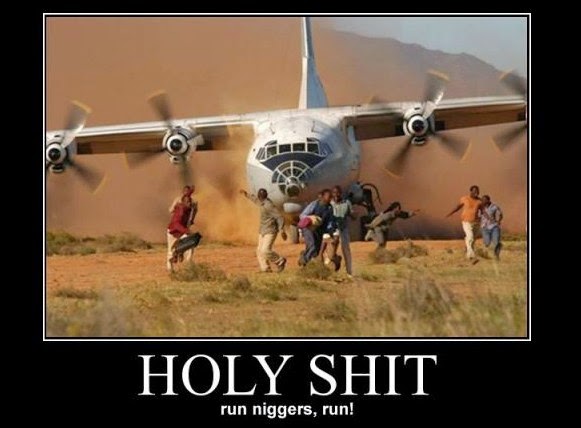 Always remember though, this is Buffalo and no matter what this guy, who currently happens to sit on the Board of Education, does or says or sends out in an email we always look the other way and say (say it with me kids) "That's just Carl being Carl." He can prattle on about Buffalo Schools being the "plaque" of the community. Can we discover them on our teeth with those nifty red tablets they used to hand out in elementary school?  He can complain about " Phil Rumor's clan of parasitic teachers" -- note the deliberate misspelling of Rumore --"brainwashed kids" "activist wackos" and the rest of the damned public gumming up his school board meetings but nobody raises much of a fuss. Cause when he insults Buffalo Public School students, their teachers, the head of the teacher's union and the folks from PUSH, try to remember Carl's just being Carl. If there's time in the schedule I would like Carl to forward the names of these brainwashed kids. Seems the least anyone could do is find them a good deprogrammer. Names, please, Mr. Paladino. These kids need help now!
Posted by Unknown at 9:50 PM