Another Teacher's Union Gets an F in Social Justice

In the current issue of The Provocator,  the Buffalo Teacher Federation's newsletter as it were, we see what appears to be an unobtrusive note of thanks to BTF for donating the sum of $400.00 to a local church or more specifically to the Pastor who appears to have forwarded the entire donation to one specific member of his flock. Not much to see here on the surface but when did we ever settle for the surface, friends, when there's serious muck to be raked? 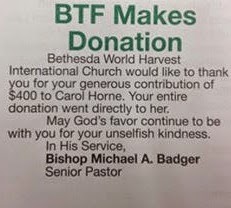 The name Carol Horne rang an odd bell in my head but I admit I was unable to place her without a few googles. But here's a thumbnail sketch of how her name came to be in the paper :

Justice is as justice does; and - in this case - justice didn't happen. In 2006, Carol Horne (pic below by Buffalo Bullet), was a 19 year veteran of the Buffalo, New York Police Department, who stood tall against a fellow officer (Gregory Kwiatkowski) brutality of choking a handcuffed black man (Neal Mack). Instead of being commended for doing the right thing -  Carol Horne was fired and denied her pension.
excerpt from  DemocraticUnderground

I am trusting you see the attempted social justice gesture here. The intentions are good. But... But as I stated previously teacher's unions and social justice don't always gel exactly right. What begins as an attempt to make points with the community ends up pissing off people on the sidelines who want to know why your union is playing favorites ad picking winners and losers. As in the case of AFT President Weingarten's sloppy wet kiss for Al Sharpton and his march against the NYPD (call it what you want but that's what it ended up looking like)  this cash gift to a terminated black female cop is a potential shit stirrer with the rest of force who may have their own opinions about Officer Horne, Officer Kwiatkowski and a teacher's union who hands her hundreds of dollars around Christmas time. The gesture could easily be interpreted as a repudiation of their police force and its ability to terminate the right person given the dynamics of what transpired between Kwiatkowski and Horne in a driveway as he struggled with a man he was arresting. He claims she jumped on his back and grabbed at him and she says he was choking the cuffed guy out and she wanted to assist. She was punched in the mouth in the struggle causing damage to her dental work. Not being a cop I am going to leave it at that.

So Carol Horne's name drops into place and I begin to wonder about this Bishop Badger whose name has a similar ring to it but I suspect in this case I know why. Sure enough Badger and another prominent Black Pastor by the name of William Gillison were two of the most vocal critics of the gay marriage movement in New York before it was voted into law. Speaking to some media types Reverend Badger rationalized his lack of empathy with the gay community thusly:


taken from a local blog a few years back...

Bishop Michael A. Badger, pastor of Bethesda World Harvest International Church on Main Street, said that he doesn’t doubt there is discrimination against gay people but that it is hardly on the order of what African-Americans have encountered and still face.

So the right Reverend in his biblically inspired logic has it that black people can't control the color of their skin but gay people can sure as shit control their urges towards intimacy with other gay people and therefore he has nothing for them. Of the two he's the diplomat. Gillison is even more medieval. As a teacher I have many gay friends who are also teachers. Simple fact. Am I to simply blow them off and disregard their interests and human rights so that my union can hand cash to a minister who tells anyone listening that gay people are not his problem and their problems are not as bad as his problems and if they would just refrain from intimate contact with their loved ones they wouldn't have any problems? Is this clown someone we need to be in bed with even as a middle man whose role is to hand off money to someone else I know very little about? See why this is the mess it is when it's handled half assedly? Oh but we're not even there yet friends. Here's the real Weingarten/Gates/Klein/Bloomie bag over the head kick in the crotch. Have a look at this snippet from the Buffalo News and see if you can guess who's applying to grab up East High School and turn it into a charter in the 2016-2017 school year: 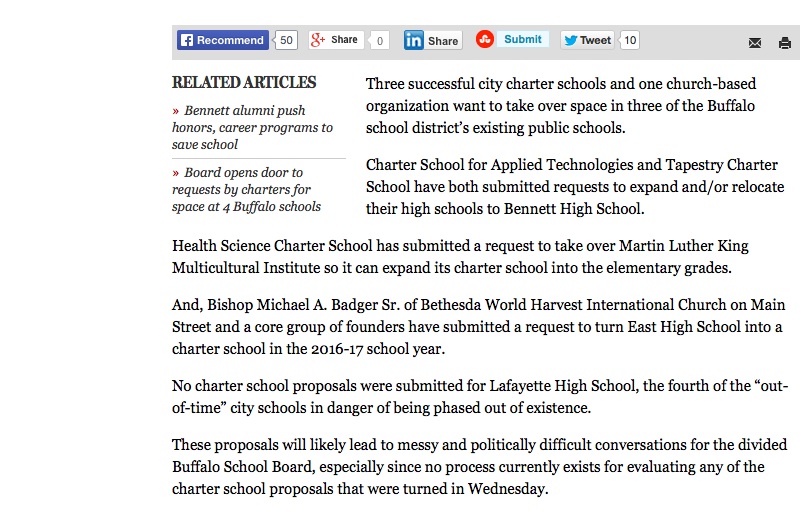 While he's writing us thank you notes for hooking up one of his faithful on one set of stationery, he's using his legal pads to get his hooks into East and privatize it. Remember how pissed off we all were and so were the faculty, parents and alumni of East last time this happened? Remember Prof Joe Gardella from UB who runs the STEM program shook his head and explained how none of the charter group even asked what was going on in the school or what projects they were running. It was outrageous and ridiculous and we all said so.

I guess I have to ask what changed between the time lawyer Steve Polowitz and lawyers wife Amy Friedman and that idiot yelling about teachers getting a haircut and losing all their benefits were chased away from East and now? How did we get to be such buds with the anti gay, pro charter Reverend Bishop Senior Pastor Badger and why are we, as a union playing nice with some privatizer who'd put 50 of us on the street without batting an eye? I know you're supposed to keep your friends close but your enemies closer. My question for BTF is do they even know who the hell their friends and enemies are?  This entire stupid tangled mess has the stink of that losing "we need to have a seat at the table" strategy our so called leaders have hidden behind while negotiating half a turd sandwich and telling us the good news is we won't have to eat a whole one. The other day I had a younger teacher ask me if there's any way she can quit paying her union dues. Is anyone out there wondering why she asked?