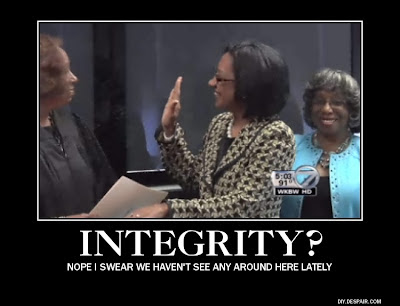 Amber Dixon has decided to "Go in another direction" as we commonly say now of anyone who tells us to Take this Job and Shove It. If I needed any more reasons to admire this lady, and I don't, I have to say I love the way she slammed the door in the Sorority Majority's face and threw out the word INTEGRITY in 72 point characters for them to chew on since it's not something anyone sees much of around the City Hall and Board of Education buffet table. She didn't want to burn sick time while job hunting so she resigned. I think I would have a hard time finding too many people anywhere who'd have a problem with her doing exactly that. It's your sick time, you earned it, use it is what you'd hear around most water coolers. But that's not Amber Dixon. She actually had a problem using sick time as she sought employment elsewhere. She also worked out an APPR deal with Mephisto himself Phil Rumore, a feat everyone had written off as impossible since everyone knows Phil Rumore eats children for 2 meals and drinks their blood for dinner. Amber Dixon ended the traveling Food and Shopping Club among Board members, Sorry Sisters but this one is YOU again, and then told them to forget about their catered meals at meetings as well. They weren't shy about booking themselves $200.00 a night private rooms but when the Buffalo News caught up to them none of the frequent fliers had the guts to explain themselves, they ALL hid from questions.  And when Amber Dixon came in and said enough is enough, it's time to start acting like we care about kids and stop stuffing our faces and our suitcases, the Traveling Sisters said Oh Yeah ? See if you ever get past interim. And fortunately for Amber Dixon she is now free to go, free to pursue whatever it is she wants to do without these freeloaders and insiders around her neck like the albatross they are. Best of luck to Dr. Pamela Brown, and as soon as this little honeymoon wears off, which it will, she is going to learn first hand why she was crowned queen -- not to make a difference but to allow the usual suspects to continue with business as usual. God help her when she crosses them, though I rather look forward to it because she will really have no choice but to do exactly that. Best of luck and God Bless, Amber Dixon.
Posted by Unknown at 1:48 PM