Friedrichs is Coming. But You Wouldn't Know it Would You?

Anyone with a faded union sticker curling up from the edges on their windbreaker can probably tell you we're screwed when the same Supreme Court who thought Citizens United was a swell idea gets to decide if unions should be allowed to deduct money from rank and filers paychecks. As public sector unionists we are about to become citizens of a Right to Work Nation. Or as my union electrician friends in Florida call it a "Right to Work for Less State." There is understandably much angst and wringing of hands. Xanax and Ethanol intake is on the uptick. Surely our union leadership has a plan, they can't just be fiddling while the flames of ed reform begin to lick at the soles of our sensible shoes.

Unfortunately, R. Weingarten, Ed Reformer, is busier than a one armed paper hanger assembling a nifty new amalgam of her ed reform friends for Hillary. #TeachWrong is taking up most of her collaborative energies so we're not hearing a lot from her these days. But that's not to say the flow chart has been derailed, no, far from it. Here in the Empire State we saw just last week how Ed Reformer Weingarten's hand picked successor to UFT in NYC, one Punchy Mike Mulgrew is standing tall. As an ersatz Boy Friday Mike is covering the hot topics and burning issues our feckless President can't make the time to address. APPR? Receivership? Half of Buffalo Schools working with no labor agreement in place by way of NYSED Commissioner Elia's Imperial Edict?

No, not that you ninnies. This! Beth friggin Dimino, President of PJSTA down Long Island way needed to be pushed in the dirt or have her standards taken away or something. It was with a heavy heart that Loyalty Oath Sworn Unity Caucasian Commodore Mike Mulgrew had to suggest Beth should go join forces with the Koch Brothers instead of representing teachers in fights Unity and AFT find beneath them or simply not worth the effort. Ms. Dimino committed the unpardonable sin of suggesting teachers rethink donating their hard earned dollars to VOTE COPE. Yes, she raised the pre-Friedrich's spectre of NYSUT hacks being separated from a comfortable flow of rank and file cash. Woe unto her who redirects funds from the geniuses who put out ads like these: 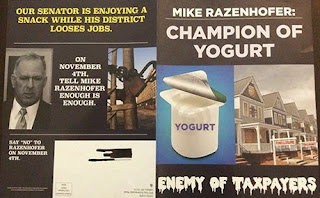 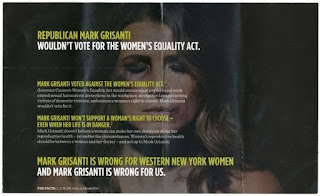 The top ad misspelled Ranzenhofer which is mildly overlookable but should an ad sponsored by teachers spell "lose" with to o's? This is what your donations are getting you folks.

The one below caused an uproar here in Buffalo as it suggested Mark Grisanti was somehow cool with domestic violence and probably would step over a victim to get to his favorite slot machine. The local teacher hating Buffalo News had a field day with it and countless local political hacks got to play their "Well I've never been so offended" cards. It was a great moment for phony indignation and an easy cheapshot on teachers for being associated with such a foul ad.

Not that Beth Dimino mentioned either of these ridiculous ads but did she have to? Do we really see anything coming out of the double pensioned braintrust of NYSUT that gives us hope, or makes us want to rally with drums, armbands and loudspeakers? So Punchy Mike of the UFT/Unity Caucus that wags the NYSUT dog has stepped up and attacked the very type of union leader the rest of the state admires and accuses her of being in league with billionaire ed reform sponsors. This is the caliber of leadership our dues are buying us?

Not to be outwagged by UFT/Unity Caucus, Fearless Andrew Palotta has weighed in at the NYSUT meeting of Very Important NYSUT people to make his own shrill cry for justice. Is he railing against the Cuomo evaluations with 50% of it coming from standardized test scores? Is he speaking truth to power against the scourge of receivership in New York State? Mmmm nope, not that. Andrew Palotta, NYSUT's Executive Vice President took up a good chunk of the Very Important NYSUT People's meeting complaining about a teacher blogger's post that Andrew Palotta felt cast him unfairly in the role of a mobster. While no such claim was ever made nor was anyone ethnically stereotyped, the comparison was aptly drawn that handing over dues to NYSUT is akin to paying for mob protection. No matter how little return you see on your investment or what hardships you incur (hardships that NYSUT does nothing to mitigate) you are expected to shut up and pay up. Executive Pallotta thought this merited a call to the Attorney General. Executive VP Pallotta also thought filing a claim of discrimination against a teacher his union allegedly supports would be in order. Yes, he thought that.

Do these people ever talk to each other? Did anyone say, you know A.P. with half the frigging state in receivership, teachers under attack from every conceivable angle including the media, contracts suspended, a Commissioner who's declared war on the Opt Out parents.... You know? Maybe this isn't really the thing we ought to be spending our time on just now... Did anyone run that scenario by this guy? I guess nobody did or if they did he refused to listen. I have to wonder too if anyone had the stones to tell Punchy Mike, "...You know Mikey, Beth Dimino is big in France, they love her in Buffalo too, maybe she's not the one you should be poking with the stick right now huh? Maybe that could backfire in a really weird  unpredictable way." I suspect nobody made that appeal or again if someone of that perspicacity does exist in either of these "union" enclaves they were summarily ignored by "leadership."

What gets me is the other shoe hasn't even dropped yet. We are still laboring under the sword of Friedrichs so to speak. And from where I'm standing I see no sign of NYSUT organizing, strategizing, nut hoarding or gathering supplies for the coming winter. I see nothing but highly placed and well paid so called "union leadership" men lashing out at rank and file teachers who've shown the temerity to question the direction and merits of union leadership. Edward Abbey said "Power is always dangerous. Power attracts the worst and corrupts the best." I'll let you decide friends who was attracted and who was corrupted. It's a coin toss from where I'm sitting.