The World's Most Trusted Non Educator is Coming to B-Lo

Ever get that weird, sketchy vibe when someone who is not an MD insists on referencing himself as "doctor" everywhere he goes -- even on the Twitter? If not you'll be glad to know that "Dr." Steve Perry who also references himself as "The World's Most Trusted Educator" is coming to our little outpost on Lake Erie. The endless self referencing as "doctor" is obnoxious make no mistake but you've really gotta give it to a guy with Zero time in the classroom calling himself "an educator" for openers and once he's warmed up he becomes The World's Most Trusted Educator? Stevie, Please. If I were one to take this kind of clown seriously I'd have to inquire what measurements he used to measure "trust" and where he did his sampling. If it was as rigorous as his alleged doctorate it would amount to making half a dozen phone calls  to Upward Bound staffers then recommending ways future researchers could elaborate on his "body of work." Mercedes Schneider does not suffer fools. She examines the lack of rigor and grit in Perry's doctoral thesis HERE.  Among other eyebrow raising facts, he only had to have one professor sign off on his doctoral degree. Dr. Schneider points out that her own doctorate took twice as long, included twice as many credit hours and had to be approved by 5 separate professors including the Dean of Education. I already think I trust her more... In an educated version of the bitchslap Schneider compares Perry's diaphanous dabbling with scholarship in his lightweight doctorate program to a woman who gets married so she can have a diamond ring. Owch. She adds "Perry has earned a “cereal box doctorate”: Buy the cereal; pull out the prize. That’s it." Owch. Owch. But that's why we love Mercedes Schneider who doesn't affix "doctor" to her name even though she possesses an actual Ph.D. in Applied Statistics, is crazy smart and cranks out dizzying amounts of mini dissertations with citations between dinner and bedtime.

Ahh but we've see this sideshow before haven't we friends? The ed reformer playbook is not a complex canon. For openers it involves maligning public school teachers and their unions. Dr. Steve in a fairly well known public ejaculation called teacher unions "roaches." Accusing public schools, teachers and unions of perpetuating racism is another must from the ed reformer's script. Dr. Steve likes to play the hood thug in a snappy suit card when he thinks he can get away with it. In another of his more notorious twitterings he snarled about being denied the chance to charterize a local school saying "there will be head injuries." So we've got the attacks, the posturing, the race card in play and now we turn to another time honored tradition of the reform/privatization crowd : the outlandish promise. Dr. Steve's students all get accepted to college. And if you don't want to go to college, go somewhere else. Yes, he's actually said that too. True to ed reform form, Dr. Steve has a few cards up his sleeve and probably a few stuck to the bottom of the table too when it comes to fulfilling his wild claim that all of the kids in his school get into college. Are you wondering about the population of his school? Like how many of them would be considered living below the poverty level? The common metric for determining this is how many of them get free or reduced lunched? Well according to the available data it's somewhere around 40%. On one hand that's nothing to sneeze at but then again, the public schools in his area, the ones he claims are taught by roaches, have closer to 95% of their kids eating free or reduced. 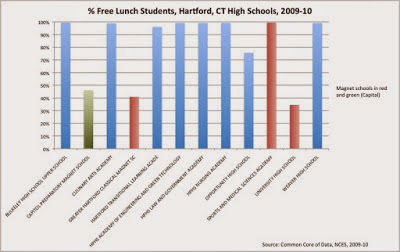 If you are still reading I am guessing you're already moving onto the next pieces of data our ed reformers don't want anyone to know about in spite of the fact that they claim to live, breathe and fart data. How many emerging English learners does Dr. Steve take on at his excellent, reformy little school? Mmmmm, this one is going to hurt, Dr. Steve, but we want you to earn all that trust so... 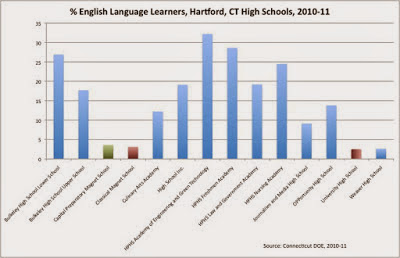 There's Dr. Steve's Capital Prep hovering right below the 5% mark while the roach instructed public schools all around his little island of reformy grit approach 30%. Anyone see how this might give Dr. Steve a slight leg up on all the competition? And if there's another sore spot the ed reform crowd gets clinically butthurt over it's when we card carrying roaches mention the way ed reformers like to unload, dump, expel and/or "counsel out" kids with learning disabilities, emotional/behavioral problems and the like. Dr. Steve is no fan of sparing the rod so to speak. He is all about correction. If you're still reading you have a pretty good idea how far this "Daddy knows best" bullshit flies with some of our traumatized, emotionally labile learners. It doesn't. Get in some of these kids' faces with your No Excuses tough guy bullshit and you'll end up an expert on your union's dental coverage. We all know that though and act accordingly in public schools. Therefore, places like Dr. Steve's House of Correction make damned sure these kids go somewhere else. Have a look: 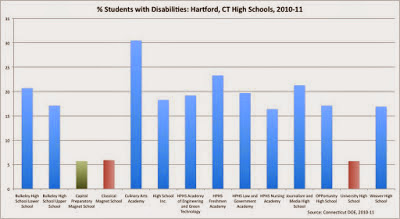 Once again, Dr. Steve demonstrates how the ed reform crowd "runs it like a business." If you can pick where your raw materials come from, rejecting all and any that don't seem exactly what you want, it sure makes the whole process a lot easier. It's not so hard to catch a big fish when you can fish from a barrel of your own filling. And maybe it's Dr. Steve's habit of  cherry picking an ideal student population that makes running his school such a breeze. Maybe that's why he's absent from school about 25% of the time too.  This from Jonathan Pelto a Connecticut ed blogger  who is something of an expert on Dr. Steve's peccadilloes:

As 2013 came to an end, Capital Prep Principal Steve Perry had missed about 30 of 127 school days, which was about 24 percent of all school days since the 2013-2014 Capital Prep school year had begun. As of the beginning of October 2014, Perry had already been way from Capital Prep for an incredible 55 days, of which about 30 or so were school days. In fact, since the beginning of the 2014-2015 school year, Perry’s absentee rate is nearly 25 percent. This disregard for his duties as a full-time employee of the Hartford Public Schools comes at a time when federal, state and local officials are cracking down on absenteeism.