NYSUT Leadership Takes a Page from Cuomo's Art of War


Never one to take responsibility for a misstep, Sheriff Andy Cuomo spent part of the weekend castigating the National Weather Service for essentially lying and misleading the public about the depth, breadth, intensity and gravity of the storm going into the books as "Snowvember." I listened to his press conference in slightly stunned amazement on my garage radio Saturday while cutting breadbox sized blocks of compressed snow with an inch of ice at the bottom in my driveway as a gentle rain fell. The rain and the waist deep snow were surreal to be sure but  nothing compared to the accompanying audio of Cuomo blaming the NWS the way a drunk damns the bartender or a toddler blames the crack in the sidewalk. We were warned. We scoffed as we usually do. I made my usual wisecracks about fighting soccer moms over a gallon of 1% and a dozen eggs at Wegman's. Then I quietly scarfed up about 5 gallons just in case... The predictions were dire. Not inches but feet. And after we got the feet they predicted they said hang on folks,  it's not over yet, there's more coming Thursday night and it won't be inches then either, it will be one to two more feet on top of what you already have. By then most of us had converted and smartasses like your humble narrator were past wisecracks and wondering if Dollar General had any milk. Local weather guru and actually college educated in meteorology tv weatherman Don Paul offered this on his FB page:

Governor Cuomo's attempt to scapegoat the National Weather Service for an inaccurate forecast in advance is not only completely in error—the NWS did an outstanding job—but is a disservice to the public and to the hard-working staff of this federal agency. No forecast of such an historical disaster is going to be absolutely perfect, but no one who lives here can say this event was not well forecast in advance, or that the warning headlines of its impact to come were not well explained in advance...his statement is disinformation, purposeful or ill-informed. Twitter offers this for further proof that Gubner Andy is spinning his wheels in the snow: 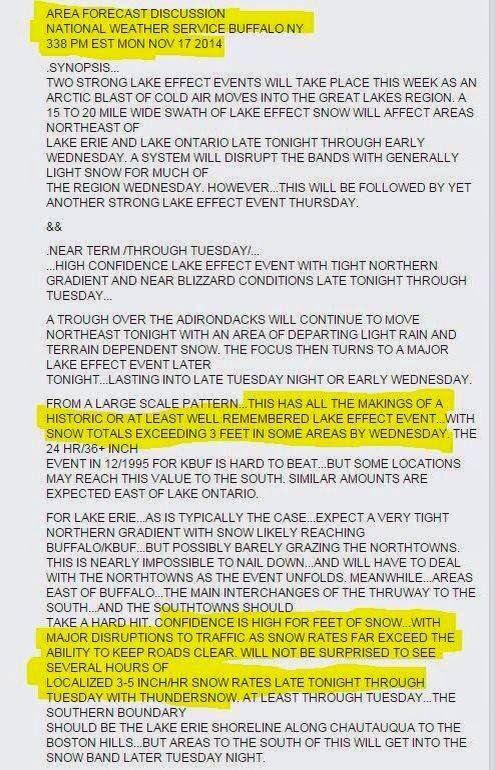 Good thing Cuomo isn't being evaluated on his ability to comprehend the text. Maybe a few close readings might further his grasp of what did and didn't happen around here. I find the college sophomore yellow hi-liter's work particularly damaging to the Gubner's claims. (John Oliver had to postpone his show at UB Tuesday night managing to get off a blast about Buffalo and our "ridiculous thunder snow" in his tweet.)


And by sheer finger pointing coincidence word has reached us through the snow that Cuomo's minions in NYSUT -- in spite of what they claim, they are his crew, the same way Weingarten is his girl -- are using election data to harass union members for not voting on election day. What? Yes. NYSUT "leaders" like Karen McWho? are hammering local union leadership and blaming members for failing to vote (against Cuomo?) last time around. I read on the twitter where one of Cuomo's henchmen threatened his sheep that after election day they would have a list of who voted and who didn't and it would be used the way politicians use such data to punish anyone who didn't Harrumph at the proper point in time:

Coming from a Cuomo operative one tends to shrug and say Yeah that's Andy's team all right, that and the lawyer who suggested Astorino's running mate, Sheriff Chris Moss could find work on the box of Cream of Wheat or fill in for Aunt Jemima after the election. No shocker there really. But when you learn that your union leadership who fake fumbled the ball when it had a chance to endorse and rally behind Zephyr Teachout is borrowing a page from Cuomo's book of thuggery it makes you re-think your Vote Cope donations at very least. For NYSUT "leadership" to blame members for losing an election in which NYSUT "leadership" willfully aided, abetted and enabled Cuomo is simply unacceptable. But then again their Patron Saint Randi Weingarten's robocalls on behalf of Cuomo's running mate Kathy God Guns and Get the Hell Back to Honduras Hochul was equally unacceptable. As was the sweet pension deal they made for themselves but fought to hell and back again to prevent outgoing Ianuzzi guy Peter Cutler from getting. As is the directionless, spineless, stool at the table excuse of Quisling leadership slurping crepes at the Fort Orange Club while the rest of us brace for Cuomo's breakup of "the last monopoly" into which he's caricatured educational professionals. I once worked in a building with a Principal who'd been a Mayor of Lackawanna at the height of the steel era -- which is to say at the height of Lack City's political corruption. He'd been run out as Superintendent of the same city by political enemies and landed on his feet in Buffalo. It was widely shared that he could call Albany and get Mario Cuomo on the phone in the time it took to change classes. While we walked the halls one morning in one of Buffalo's most dangerous and since shuttered high schools, he explained to me that politics was a game. "You take care of your friends" he said, then smiled a nasty grin adding, "And you stick it to your enemies. And one is just as important as the other."  Not sure how the rest of you are feeling these days but I for one am about sick of my so called friends sticking it to me every time I turn around. What's left for my enemies?