Today's Democrats, Who Are These People Anyway?

Anyone else want to hurl watching Rahm Emanuel speaking at the Dumbocratic National Convention? His city of Chicago turned out about 20,000 red clad labor supporters yesterday many of whom were marching in solidarity with the Chicago Teacher's Union. Rambo has declared war on CTU and stacked his appointed board with among others, one Ms. Penny Pritzker, a billionaire heiress to the Hyatt Hotel fortune. Do you think Pretty Penny likes the teacher's union or do you think maybe she's more comfortable bitching poolside with the other "reformers" about the way the help don't shake her martinis properly? Yeah, you're probably right about that too.  And if that's not bad enough, there is also significant evidence that Emanuel is using tax schemes to divert school funds Pritzkin's and Hyatt's way, essentially building a hotel with the money instead of funding Chicago Public Schools.
Regardez:

According to CTSC, by law, 62% of Chicago’s property taxes must go to public schools. But TIFs (Tax Increment Financing) schemes, allow the Mayor Emanuel to take tax money from schools to use for political favors for the 1%. Seven Chicago neighborhood schools, (Dyett, Kenwood, Canter, Reavis, Burke, Ray and Kozminski) are targeted for over $3.375 million in cuts losing 27 positions in the Chicago Public School Board's proposed 2013 budget. Mayor Emanuel appointed Hyatt hotel mogul and personal billionaire Penny Pritzker to the unelected Chicago Board of Education, and now her family appears to be benefiting from a free new hotel paid for by the public. Interestingly, 62% of the $5.2 million TIF project is almost exactly what's needed to fill this funding hole in the 7 neighborhood schools. 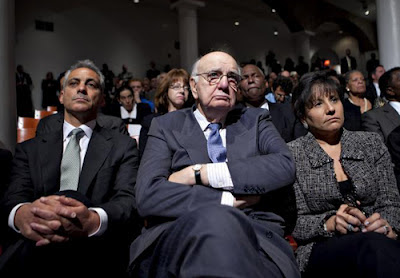 Hyatt Hotel billionaire owner Penny Pritzker (above right) not only served as Barack Obama's 2008 campaign finance chief (helping Obama raise the largest amount of campaign cash in history), but got Obama to drop his support for the "card check" approach to union organizing, when her Hyatt Hotel interests were threatened, despite Obama's promises to the AFL-CIO. Above, Pritzker sat with Paul Volker (center) and Rahm Emanuel (left) during an Obama speech on Wall Street. Penny Pritzker now supports Emanuel's candidacy for mayor of Chicago and has helped Stand for Children raise more than $3 million (including $50,000 she donated herself) for its PAC fund to undermine Illinois teacher unions.Are these your kinda people or do they look like they'd fire your kinda people?

As a recent report from one of the most factual news services in Springfield points out, Stand for Children, which didn't exist in Illinois five months ago, is now the best funded political action committee (PAC) in the state, having gone from zero to more than $3 million in its coffers thanks to a handful of Chicago area millionaires and billionaires who donated as much as a half million dollars to Stand for Children just before Illinois law changed putting a cap on the donations. The same billionaires and millionaires are bankrolling the Rahm Emanuel campaign for mayor or Chicago. One of those who made a major contribution to Stand for Children (Tribune corporation's Sam Zell, who donated $100,000 to Stand for Children) also puts out the supposed surveys that show Emanuel as the leading candidate for mayor (via the Tribune - WGN polls).

If you've ever worked or attended a "failing school" you know damned well what difference funding can make. We used to call Burgard leftover tech as any time one of the "good" schools got anything new, it seemed Burgard got all of their old shit. Heyyyy... do these come WITH ditto fluid or do we have to go find some at a junkyard?  If you want to make sure a school or a team or a family or your happiness fails, take away its funding and see how far you get without it. But this is the Democratic Party folks, we are all about the workers right ? Joe Biden is telling everyone Romney hates the middle class but what did he say a few weeks back when hundred if not thousands of Chicago teachers were shoving GET RID OF RTTT fliers in his face ? Did he not GET IT? And how about that Chris Christie teammate Corey Booker? He rescues people from fires he storms around like the crazy offspring of Joe Clark and Wanda Sykes but come education time he's another union sell out and Ed "Reformer." If Corey Booker was coming to help my school I would ask him to go rescue someone from a fire instead. Prince Andy Cuomo is telling the media he's keeping a low profile at the Convention. As well he should now that middle class voters who put him in office are learning how he tried to keep 4 of the states' biggest labor leaders from attending the convention unless they called to grovel and promise their allegiance and good deportment to him. This party does not support middle class workers or unions. They are said to be courting two demographics hot and heavy right now. Women and Latinos. I guess that would assume labor is all ready thought to be in the bag or is such a small and insignificant group they aren't even worth going after. I repeat myself. I intend to repeat myself. Maybe if I repeat myself enough times I will believe the party of LBJ and JF Kennedy has stooped to corporate ass kissing and sold out the group who created America's thriving middle class. In the words of Karen Lewis President of Chicago Teacher's Union : We didn't start this fight but enough is enough.
Posted by Unknown at 10:01 PM