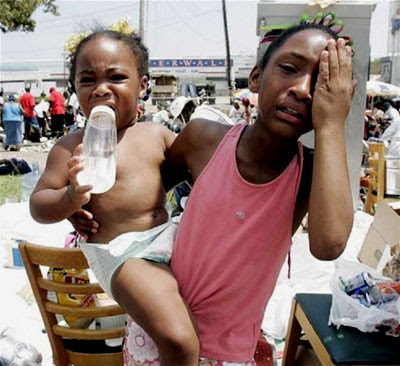 When Obama's Secretary of Education, Arne Duncan let slip the unfortunate quote about Hurricane Katrina being the best thing ever to happen to New Orleans Public Schools, he telegraphed one of the main strategies of the "reformers." If you've been fortunate enough to read Naomi Klein's book The Shock Doctrine you should be nodding your head about now. If not here's a little taste that shows exactly where this is headed :

“Countries are shocked—by wars, terror attacks, coups d’état and natural disasters,” she writes. Then “they are shocked again—by corporations and politicians who exploit the fear and disorientation of this first shock to push through economic shock therapy.” People who resist are shocked for a third time, “by police, soldiers and prison interrogators.”

In the case of New Orleans the city was decimated by Katrina and the eroding levees that allowed entire sections of the city to be submerged for days on end. It is precisely this sense of disorientation and desperation that the so called agents of change use to their advantage to ram through any and all of their agenda items while the populace is still reeling and in a compliant mood. While the deformers haven't to my knowledge figured out how to plan hurricanes and earthquakes they are extremely devoted to the narrative that THERE IS A CRISIS IN PUBLIC EDUCATION.  Or as one of the "consultants" at a high end breakfast meeting of investors puts it :

The investors gathered in a tony private club in Manhattan were eager to hear about the next big thing, and education consultant Rob Lytle was happy to oblige. Think about the upcoming rollout of new national academic standards for public schools, he urged the crowd. If they're as rigorous as advertised, a huge number of schools will suddenly look really bad, their students testing way behind in reading and math. They'll want help, quick. And private, for-profit vendors selling lesson plans, educational software and student assessments will be right there to provide it."You start to see entire ecosystems of investment opportunity lining up," said Lytle, a partner at The Parthenon Group, a Boston consulting firm. "It could get really, really big."

Lesson Number One of Charter School 101 - Shock the public with HOW BAD PUBLIC SCHOOLS ARE.  This will soften them up for the AWE of what a nifty idea charter schools are. (And nobody has to know that yet again a small handful of people are getting VERY VERY RICH.)

In Buffalo we saw just last week a letter to the editor from yet another "reformer" lamenting the small gains in state test scores. She called it AN OUTRAGE. I think if all the scores went down 20% we'd have an outrage. The fact that they improved slightly seems to make sense just as the economy has improved slightly and we had a slight hope of improvement under Amber Dixon's leadership here.  But the "reformers" have their agenda and number one on the list is to make public schools look as bad possible no matter what it takes. And if anyone's wondering about these moronic APPR requirements and this asinine high stakes testing campaign, you guessed it. They both serve to make public school teachers and their students look BAD. As long as public schools look good the Charterians have nothing to shock the public into compliance with. But can you imagine for one second Linda Darling Hammond whom Duncan nosed out for the job saying anything as irresponsible and downright dumb? No that's why they picked Arne, a useful idiot who will do the bidding of the corporate master in Charterland.  And just as the Original Shock and Awers would point and scream accusingly at anyone who opposed them DON'T YOU LOVE YOUR COUNTRY ?  our new crew uses a similar tact in their own mantra when they say IT'S ALL FOR THE CHILDREN.
Posted by Unknown at 12:53 PM