Some People Are Simply Too Stupid to Be Teachers

Local media outlets were abuzz the other day with sizzling reports of a Buffalo teacher sending a full frontal selfie to a BPS high school student. WIVB seemed to have the most details on the story including the one that said no charges had been filed to date so they weren't going to give out the name of the teacher. According to the story the pic in question showed a nude male in a reclining position. His face and genitals were both visible. Take a deep breath friends cause this one gets pretty ugly real fast.

According to the stories floating around local outlets the pic was sent to a student at another Buffalo high school not the one where the teacher in question is employed. The recipient it seems was only too happy to show it around and before long Channel 4 was getting calls from parents telling them that a teacher had sent a nude selfie to a student. As I jumped around the various local news outlets I couldn't help try to imagine what must be going through this dude's head about now. Or better yet, what was going through it when he hit send?

I don't want to be the I told you so guy but I did say a few posts ago that this time of year is when some weird, unfiltered shit always seems to come flying out of people who, by the very nature of their profession are expected to have their filters and self restraint set to "HIGH" at all times. I am trying to imagine the context such a text could have occurred in: 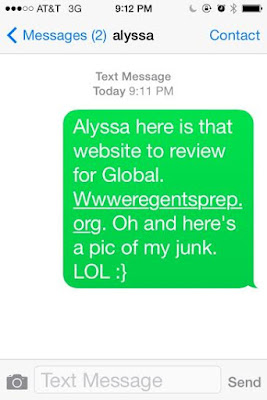 As I said I can't even imagine.

As I usually do I took a scroll through the comments of the local teacher haters who chimed in with much relish (Happy Bloomsday ye gobshites) on such a juicy topic as a sexually inappropriate teacher promoting himself in his birthday suit to minors. Someone wanted to know if Phil Rumore was going to let this guy tutor his grandkids over the Summer. Another blithely pointed out how Phil will go to the wall to protect the guy. Ad nauseam. You've likely read the comments you know what's in there.

I did stumble across one wag whose logic I found hard to argue with. Some people he said are simply too stupid to be allowed to work as teachers. And in this electronic crumb trail of an age we inhabit I had to tip my hat to him. Never mind the immorality and the turpitude of an adult charged with teaching kids their lessons and modeling right from wrong in human interactions who does this. That argument will always come first of course but there is also the stupidity angle we need to consider. How fucking dumb do you have to be to send a pic of yourself unclothed to a high school kid? And how self deluded must you be to think for even a nano second that whatever level of cool you think you're banking on is going to transcend the kid's urge to say Awwwww shit, yall lookeee here what I got! Yes it's beyond deplorable on the decency scale and the morality meter and by any measure of basic acceptable human conduct the act is wholly unacceptable. It's also as dumb as a box of frozen dog turds.

I honestly hope my union doesn't go to the wall for this one. This is not a person I think I want to call a team mate, a colleague or a fellow teacher. This is someone who I believe has some major psychological if not spiritual demons that need to be addressed with nothing less than an inpatient scenario. For real. And if we are all about the rigor and the grit and the Common Core high standards that are constantly being crammed down our throats -- we know these things are bullshit friends but play along -- then how do we countenance standing tall for someone this lacking in basic common sense?

I won't. I was stuck working alongside a kiddie fiddler way back when but none of us were onto him until it was too late. He came to our school under a cloud of suspicion and allegation but he was just smarmy enough of a psychopath to play the victim card and we sadly fell for it. Poor guy had all those girls making up stuff about him...Then he tried to put the moves on a troubled girl he'd been grooming in his classroom and the shit hit the fan. Not this time. I am willing to see what the investigation brings but so far I can't see how any of this gets any better.

It's not like this profession needs any enemies these days. We have all we can handle between the POTUS and the Governor throwing bricks at us every chance they get. We have a Commissioner who plays favorites with charters and tries to bully Opt Out parents. No, friends we don't need anyone twisted enough and/or moronic enough to be texting students his package in the second week of June. I simply can't foresee any scenario where I text a student. Of course my program is heavily regulated by HIPPA regulations and NY State OMH but I don't need them to tell me I shouldn't be texting my students. I somehow kind of knew that intuitively. I ask you if you are in the habit of texting your students for any reason to seriously reconsider the practice. It doesn't take much these days. And if you don't believe me about the public reception to the idea of teachers texting kids go have a look at the comments for yourself. It might be a Brave New World out there but you can go down swinging with a single hit of the send button. Be smart fellow pedagogues. Don't text and teach.