How Did a Meaningless Test Keep a Kid Out of City Honors?

A little walk down fairly recent memory lane should suffice to get the ball rolling here. Hearken back a few months ago to the time when Andrew Cuomo began to feel the sting of nearly a quarter million kids refusing to participate in the annual April Foolishness of high stakes testing in New York State. Looking to salve his battered poll numbers and put some daylight between himself and the education policies he's pushed since coming to power, he came up with the following dismissive summary of the tests:

“My position was, the department of education had not done a good job in introducing the Common Core, and they had rushed it, so we said, for a period of five years, the test scores won’t count,” Cuomo continued. “So they can opt out if they want to, but on the other hand, if the child takes the test as practice, then the score doesn't count anyway.” CapitalNewYork April 24,2015

Seems pretty straightforward to me, a layperson unschooled in reading the convoluted semiotics employed by politicians in places like the Beltway, Albany and our own City Hall. Yet somehow someone here in Buffalo either didn't get the message or has chosen to ignore it for whatever reasons he might have. It's ironic too that the Principal of City Honors, William Kresse would choose to use a "score that doesn't count anyway" as part of the admission process to a crown jewel school like Honors. Ironic I say because when Cuomo visited the school in February of 2013 I was messaged by several parents complaining that they'd received a robocall the night before the visit insisting that kids come to school dressed up for the event and be on their best City Honors behavior or words to that effect. I almost think I recall something about skirts and shirts and ties too but I won't commit to that 100%. The point was parents messaged me I think the way a lot of people do when they think they have something I'll write about to get their grievance some wings. It's very flattering that people actually think that but in this case I found it a little awkward and a little thin to make an entire post of so I filed it away knowing this day was coming. Over the weekend I was again messaged by another parent with the following image that I found stunning. Have a look at the big fat goose egg this kid got in the box for NY State Tests in his application: 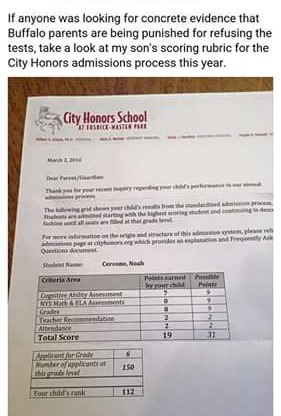 Appears to me this kid lost a chance to attend City Honors because he was dinged 9 points for Opting Out of NY State Assessments. If this score were recalculated fairly to exclude the NY State Assessment scores it appears the kid would be in pretty good shape for admission. As it stands he's been penalized for nearly 30% of the possible points he could've scored simply for exercising his option to refuse the tests that Governor Cuomo says and I quote "...don't count anyway."

It's hard to say whether this is some kind of clerical oversight or some kind of fall between the cracks of a system that's not quite been overhauled to keep up with current policies. Seems to me a guy who makes a robocall to put the school on notice to come dressed for success with its pinkies up for the Governor's visit would likewise adhere to the Governor's statements about the weight of these tests come decision making time. Nobody needs a villan here folks, it's not my intention to go burning admins at the stake. If this is an oversight it's fixable. I would like to believe it is simply an oversight not some hard-headed stand on behalf of high stakes testing.

The ugly fact is a pretty darned good student with great attendance and grades who is well regarded by his teachers is being punished by the petty politics of adults who've raided public education like vultures with their high stakes test and punishment, their gobbledygook gibbering about "college and career readiness" their half baked notions of "grit" and "excellence" -- of late they're even trying to quantify "joy" by some unholy flat earth metric. If this kid's parents haven't called Saul yet they should. But wouldn't it be that much better of a world if they didn't have to? Ball's in your court Dr. Kresse, for this kid's sake and a bunch of others you need to call the right play.