Corporate Education Reform Is Taking a Beating and It's About Time

With this week's SCOTUS ruling a No in Thunder to the ridiculous Friedrich's Case, public sector unions are breathing a sigh of relief on the level of Dostoevsky's graveside pardon from the firing squad. We'd been marched in front of the gaping hole, blindfolded and had an unfiltered Sobranie shoved in our mouths for a final smoke. Then Anton Scalia tipped over on his shadily comped luxury hunting trip and we heard our executioners being ordered to stand down. Forgive me if I embrace an Hitchensian lack of respect and phony sanctity over Scalia's passing but the guy did a lot of damage to a lot of people especially our friends in the GLBTG community. Had Scalia returned whole from that exclusive safari we might well be miles up the creek in question sans paddle as members of BTF and NYSUT.

But we've lived to fight another day and I have to believe there's good reason for us to embrace what feels like the most momentum we've had in the battle against corporate ed reform and the powers of privatization since I took up the fight whenever that was. Aside from Friedrichs taking a dump it seems like there's been more than a little good news for the good guys. 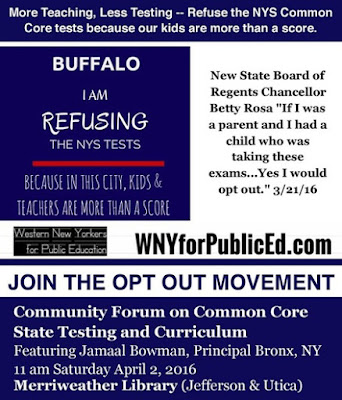 And as if the corporate ed reform camp wasn't reeling already along comes Mr. Jamaal Bowman, an accomplished African American Principal from The Bronx to share his message of Test Refusal with Buffalo's Black Community the week before testapalooza commences. It was almost on cue a few weeks back that Dr. Nevergold at a test refusal and anti common core forum posed the question Why don't out Buffalo kids opt out? I sensed she was trying to be both provocative and diplomatic, asking the question in a way that didn't accuse Opt Out of ignoring Buffalo yet asking at the same time if Opt Out was ignoring Buffalo and if so why?

I regretted not speaking up at the time because I heard a lot of agreement on my post afterwards that the DPCC and specifically their frontman Sam Radford have had their pro-NYSED, pro-testing, anti teacher and BTF  way without an equally forceful voice from the Black Community to counter him. If you caught any of their exchange on Twitter last weekend it's clear that the days of Sam Radford controlling the narrative are coming to an end as well.

If you haven't heard Mr. Bowman speak on refusing the test and punish regimen you'll get your chance Saturday, April 2, at The Merriweather Library. It starts at 11:00 a.m. Jefferson and Utica. Be there. Period.