About 2 hours into a self imposed internet hiatus I receive a text message from a BTF friend with the following attachment: 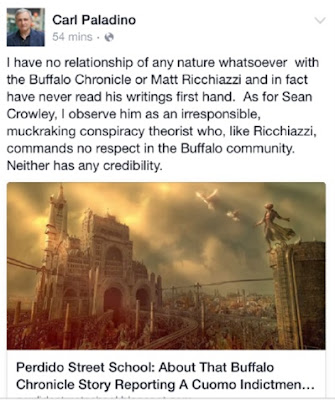 The hiatus I volunteered myself for was an attempt to settle myself down and escape idiotic gunsplanations about why Americans should simply accept that guns will always be available to any asshole who wants them and if they are the kind that shoot really fast and kill lots of people, including school kids, well that's just how it goes, pal. I'd had my fill of the guns and ammo rhetoric and I figured the best thing I could do was just remove myself from the nonsense. I read this thing, shook my head and shut off my phone. It too could keep.

Since Carl Paladino became a Board of Ed member in Buffalo I've mentioned him on this blog probably dozens of times. Funny though nothing I've ever said about his antics as a board member has ever caused him to even acknowledge I exist. And I've said quite a bit  -- very little of it flattering to a guy who is used to flattery from his legions of fawning admirers. But in debunking a Buffalo Chronicle post a few weeks back in a comment on Perdido St. I mentioned that someone had told me Paladino pays Buffalo Chronicle's expenses. I also mentioned that I wasn't even sure it was true but it had me thinking so I repeated it in the comment. Mea culpa.  And when BC came out with its latest whopper about Cuomo being indicted bY Preet Baharra on Saturday January 2, the author of Perdido St. reposted my last remark about the low credibility of Buffalo Chronicle to cool the fever of anyone popping champagne and street dancing over the "news."

In retrospect I realize I kind of pulled a Carl and said something a lot of people suspected or were thinking but I really couldn't prove it. Buffalo Chronicle and Carl were pretty much the only ones still defending Fillmore District wannabe Councilman Joe Mascia after he'd been recorded surreptitiously by a vexed employee carpet N-bombing prominent black politicians and throwing in a camel jockey reference for good measure to insult another guy. Carl has donated thousands to Joe Mascia over the past few years. Buffalo Chronicle is packed with pro-Mascia posts. It's also pretty kind to Carl in anything that mentions him. Then there's the bizarre escapade where BC publisher/writer Ricciazzi and a female associate, Mascia's campaign manager, entered a city hall office of a Mascia opponent and attempted to create a confrontation wherein they accused him of swearing at them and putting his hands on them. This all turned out to be bullshit when eyewitnesses and cops traded notes. Truth be told I live in the country and none of these people's affairs really have much to do with my daily activities.

But like a lot of people I love a good story especially a crazy one with guys being recorded in racist rants, people faking fights in City Hall offices, guys defending racist ranters and accusing everyone else of being too politically correct. You see why this stuff would catch my eye. I'd also encountered the female associate/campaign manager on social media where she'd made a habit of attacking Buffalo teachers with charges of racism and indifference to the sufferings of the kids we teach. Another education activist told me she was lurking at an event recently making ominous remarks about the coming school board election, presenting herself as someone in the inner circle and hinting that Carl had some big surprises for everyone when the election rolled around. With all of this in my head I now see why I'd slip as I did and jump to the conclusion that B.C. could be financed by Carl's millions.

Who pays for that crackpot blog is really of no concern to me. As a muckraker with no credibility who's failed to command respect in the Buffalo community I have to say I'm wiser if not sadder for my 15 seconds of internet fame brought to me by the rich powerful guy everyone's terrified of. Buffalo News editorialist Rod Watson, whom I rarely agree with, pointed out the disparity in the scant outrage dispensed by prominent local figures when Carl's emails and "damned Asians" comments etc. were made public vs the tsunami of scorn and contempt Joe Mascia encountered when he was busted calling Mayor Brown and Rev. Pridgen nasty names. Joe Mascia is another schlub with a city gig barely getting by, in other words, an easy guy for everyone to get up on their moral high ground and rain down their indignation upon. Carl?  Not so easy to throw stones at especially if you're trying to get yourself elected or re-elected. You don't want the guy on your bad side especially if you're interested in playing the B-Lo Game of Thrones. And since I'm not, I'll return to my rightful obscurity as teacher/blogger, raking the muck and chasing some credibility.
Posted by Unknown at 10:17 AM