School #6 Besieged by Carpetbaggers. Put It All On Omar's Tabb.

Wednesday night a Buffalo teacher, Mel Holden, addressed the Board of Education and asked how a school with 30 plus "at risk" and ELL kids in a single classroom are supposed to get a quality education. This same question was put to the school's EPO Superintendent Omar Tabb and his answer was straight out of the ed reform script: "Excellent teachers can teach classes of any size." Now if you think that sounds like an answer from someone who is trying to "fix" the school I think you should offer your services to ReformEd, they love volunteers. If like the rest of us you hear a guy determined to keep the school from improving while he cashes a fat check in between trips home to Arizona where he actually resides then I have to ask how nobody on the Board is onto this guy.

And better yet, by the time you're done reading Mel's piece, explain to me how nobody from the Buffalo News found these expenditures noteworthy if not outrageous. In fact the reporter tasked with running the News' Live Blog of the meeting didn't even mention Mel Holden's remarks in spite of the fact that she provoked the loudest applause of the evening. Buffalo News reporters were terribly butthurt when Buff State Professor, Dr. Nikischer's research study showed up their charter school and ed reform bias a few months back. But when they ignore this kind of outrageous educational neglect and bold faced greed from another educational carpetbagger they make their bias pretty obvious.

Have a look at Mel's remarks from the meeting:

Yesterday about 100 people gathered at School 6 to oppose and refuse receivership of 5 Buffalo Schools in September 2015. We chose to hold the rally at School 6 because School 6 is one of those 5 schools. It is also a school currently being run by an expensive EPO, Research to Practice. The 2014-2015 funding for this EPO was approved during the last Board meeting. The total amount of money that this Board approved with no discussion or dissent was $1.3 million. It is known that the  “superintendent” of School 6 does not LIVE in Buffalo, or even in NYS. Omar Tabb LIVES in Arizona. He TRAVELs to Buffalo for work, for a paycheck. The EPO Research to Practice is being paid around $3 million over the course of 3 years to “improve” the school. I ask you, though, how does a school “improve” when there are well over 30 “at risk” and ELL children in a first grade classroom? I ask the Board this question: How do you improve instruction when the EPO superintendent is asked for more early childhood teachers to lower class sizes and he responds that “excellent” teachers can teach classes of any size? Yes, they can, but those 38 children in that one classroom with one adult are not going to be given enough attention to THRIVE. We don’t want our children to just pass an assessment. We teachers want our kids to THRIVE. For children at a struggling school to be in classes this large is criminal and indicates negligence on the part of the Board.

I digress, but I wanted to emphasize a point about money. The BPS supposedly spends more per pupil than anyone in the universe and the blame for failure is always heaped on teachers. That is part of the Reform mantra. Reformers, including the ones on this School Board want to label schools as failures, label teachers as failures, label students as failures and label districts as failures. How is it the teachers’ fault that money needed to improve schools is used improperly? That is not the teachers’ fault!!  That is the fault of the DISTRICT and their deliberate lack of oversight on the distribution of funds that come into the district!!!  If you’ll look at the screen, you’ll see that Research to Practice gave themselves $31,200 in “fringe” and $40,000 in “travel.” Also, they charged $75,000 for a “management fee.” What money went to the students? $12,000 in “Student/Teacher supplies” and $5,000 to “Staff Resource Library.” The “Educational Change Leader” was paid $150,000.

What I’m trying to say here is that the bulk of the money does not go to the students or even the teachers. Millions upon millions of dollars have come into the district through Race to the Top, School Improvement Grants, EPOs, and soon “receivership”. This money is being improperly spent by the district on trying to prove the reform mantra of “failure” in urban education. Ask your child’s teacher if any money was spent on field trips, cultural experiences, Author visits, library books, classroom improvements, No, the bulk of the money is spent on impostors who take the money in salary and promise false miracles.  The system of bribing districts with money began with Race To The Top and is being continued in New York State through the process of receivership. The Superintendent of School 6 is already eyeing this money. Maybe next time board members visit schools like #6, they will spend more time talking  to the much-maligned teachers instead of the profiteer EPO Superintendent. 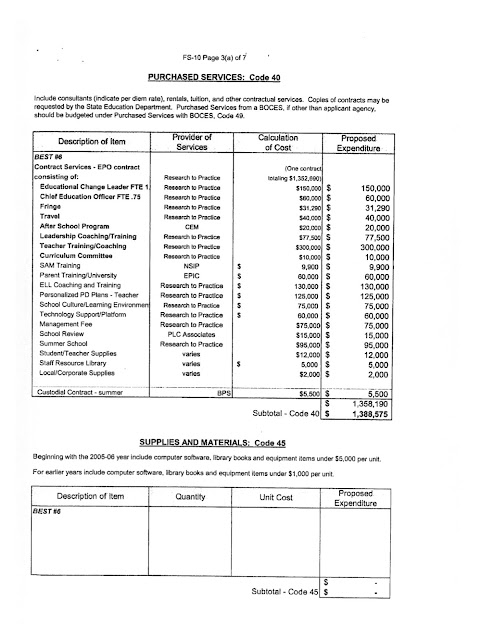 This was buried in the back of the Board Packet and it all passed without a minute's deliberation. They are going to lay out 3 million over 3 years to a guy who refuses to use any of this money to hire enough teachers when classrooms are bursting at the seams. And we are supposed to believe he's here to help. I'd like to hear Board member Harris-Tigg explain completely what a great job he's doing since last time his name came up she was all smiles. She assured us he's doing great things. He's here to collect a check and make sure this school never recovers so it can be handed over to the forces of privatization at the end of his period of misrule. And wouldn't it be interesting if the so called professional journalists in this city took the time to look into the Board Packet instead of hanging around in bars with Board Majority members while Buffalo teachers are doing their research for them.

Was it too much for Buffalo News reporter Tiffany Lankes to even acknowledge any of this in her LiveBlog? Does she really want to keep ignoring the outrages of these ed reform carpetbaggers then throw hissy fits on Facebook when she and her employer get called out for their bias? If School #6 fails and gets handed over to the charter/privatization machine we'll know it wasn't because teachers weren't trying. We'll know it was part of the manufactured failure the ed reform crowd likes to create so they can step in with their snakeoil cure.
Posted by Unknown at 11:50 AM