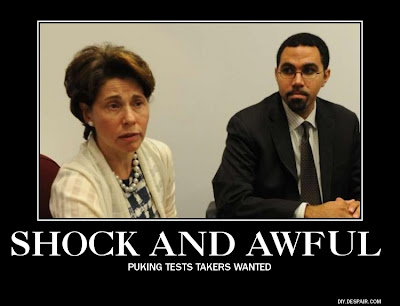 When John King  as keynote speaker  at a conference in Saratoga last week wondered aloud with  great consternation why parents were contacting him to complain about their kids' schoolwork, he sprung wide open the cuckoo door on his forehead and invited friends and foes alike to step inside and have a good look at what makes Lil John King tick.

If you haven't seen it yet here's the selection that told me more than all the Rorshach Blots in Vienna could ever divine about how John King sees himself and his role in the Cuomosphere.

"One of the most revealing comments Commissioner King made, which demonstrated just how out of touch he is, was to describe his shock at receiving letters from parents of young elementary students ‘complaining’ about their children’s math homework.  He explained his incredulity with the following illustration, “When I’m in a restaurant, and the waiter opens the bottle of wine for me to taste, I never say no, send it back, even if it’s horrible. The same with my meal, if I don’t like it I’ll eat it anyway.”


This is from a blog called Oneonta Area for Public Education it's written by my newest best friend ever,  a lady named Betsy Bloom.   Yeah, WOW. The guy hand picked by billionheiress Meryl Tisch to sit in the front seat of the NYSED boat yelling "stroke! stroke! stroke!" wouldn't say shit if he had a mouthful.  For all of his claims to "rigor" and "excellence" and "college and career readiness" this dude doesn't even have the stones to send a wilted bowl of Romaine swimming in oily vinegar and onions back to the kitchen, yet he expects us to believe in the bogus rigor of CCSS that screws kindergarteners out of naptime, third graders out of recess and Seniors out of Eliot and Plath? Come on Johnny, only a punk eats and pays for lousy food and rotten booze. Do you really think you 're going to get away with preaching all this "change is hard" rhetoric with Sheriff Andy then admit you're too gutless to ask for a decent piece of steak when they serve you the flank of some nag who finished out of the purse?

See we aren't buying your version of things, Johnny. We don't see it as our responsibility to be compliant and passive consumers of whatever anybody feels like cramming down our throats. You seem to think you're obliged to accept mediocrity, malfeasance and corporate greed cross dressing as educational opportunity. Of course you do, look where it got you.  There has always been a cloud over John King's Commissionership of NYSED. There have always been those questions about his scant teaching experience, only three years, not the five called for by NYSED's own regs and of those       years two were in charter schools.  His relationship as classmates with Tisch in Teacher's College has never been adequately explained away either but when one travels in the rarefied environs of Madame Tisch one doesn't deign to explain or beg the indulgence of proles. One simply appoints her little hood ornament to the Commissioner's job and let the chips fall where they may. In Culture and Anarchy Marthew Arnold describes Tisch and her Brahmin caste as "full of haughty tenacity."  Kind of him, I could describe it a bit less flatteringly. I guess the devil in the details of this Commish gig is that John   King would forever be beholden. He would be trotted out to present the corporate privatizer 's party line which he did with a complete lack of empathy for the victims of the havoc bring wrought by these policies. He stuck to the script, demonstrated an almost sociopathic flat affect, showing flashes of arrogance, impatience and irritation with anyone who questioned him.

King's tendency to play the loyal lapdog no matter how badly used would ultimately lead to his very public self unmasking on two stages not just one. When parents and teachers came at him  refusing to be shushed and bullied by him he had a complete meltdown. No people skills, no crowd management skills, a complete inability to establish any rapport whatsoever. When his handlers came to him and proposed to him that he was going on the road to defend Pearson, The Common Core and ed reformer values, John King should have laughed out loud and said Are you nuts? Those people will tar and feather me! But that's not in his repertoire. John King lacks that gear. Instead he does as he is told no matter how disastrous the results That's who he is. A prole. He does what he 's told.  He has no business leading a walk to the water fountain, let alone the State Ed Department.  John King must be removed from office by any means necessary.
Posted by Unknown at 11:26 PM