Why Bob Wilmers and Other 1%ers LOVE teh Charter Schools 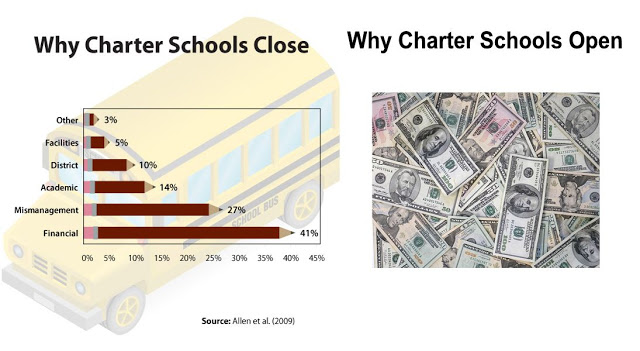 Well here's one reason Bordeaux Bob Wilmers CEO of M&T Bank might be trying to push charter school drone TFA members into Buffalo Public Schools. Ever hear of New Market Tax Credits? No of course not, peons don't get them, BANKS DO. Here's a little primer from Juan Gonzalez in NYDAILYNEWS :


Wealthy investors and major banks have been making windfall profits by using a little-known federal tax break to finance new charter-school construction.
The program, the New Markets Tax Credit, is so lucrative that a lender who uses it can almost double his money in seven years.

Ahh but as we might have guessed the charters having been launched with much fanfare and popping of corks soon begin to list and take on water while their wealthy promoters skeedaddle holding their trousers up with the weight of the booty they've stuffed in their pockets. Right here in the center of the Kingdumb, Albany NY is sucking wind under the weight of some get rich quick charterteering. Mr. Gonzalez continues :

The Henry Johnson Charter School, for example, saw the rent for its 31,000-square-foot building skyrocket from $170,000 in 2008 to $560,000 last year.
The Albany Community School's rent jumped from $195,000 to $350,000.
Green Tech High Charter School rents went from $443,000 to $487,000.
Meanwhile, all the Albany charter schools haven't achieved the enrollment levels their founders expected, even after recruiting hundreds of students from suburban school districts to fill their seats.
The result has been less money in per-pupil state aid to pay operating costs, including those big rent bills.
Several charters have fallen into additional debt to the Brighter Choice Foundation.
You'd think these financial problems would raise eyebrows among state regulators - or at least worry those charter school boards.
But the powerful charter lobby has so far successfully battled to prevent independent government audits of how its schools spend their state aid.
And key officers of Albany's charter school boards are themselves board members, employees or former employees of the Brighter Choice Foundation or its affiliates.
Christian Bender, for example, executive director of the foundation, is chairman or vice chairman of four of the Albany charters.
Tom Carroll, the foundation's vice chairman and one of the authors of the state's charter law when he was in the Pataki administration, was a founding board member of Albany Community Charter School and is currently chairman of two other charters, Brighter Choice School for Boys and Brighter Choice School for Girls.
Carroll also sits on the board of directors of NCB Capital Impact, a Virginia organization that used New Market Credits to pull together investors for all the Albany building loans.
A Brighter Choice official confirmed Thursday that the Virginia organization gets "a 3% originating and management fee" for all school construction deals that Brighter Choice arranges.
Under the New Markets program, a bank or private equity firm that lends money to a nonprofit to build a charter school can receive a 39% federal tax credit over seven years.
The credit can even be piggybacked on other tax breaks for historic preservation or job creation.
By combining the various credits with the interest from the loan itself, a lender can almost double his investment over the seven-year period.
No wonder JPMorgan Chase announced this week it was creating a new $325 million pool to invest in charter schools and take advantage of the New Markets Tax Credit.
So does Carroll see any problem with being simultaneously part of the landlord, tenant and lending bodies for Albany charter-school construction?
"I sit on the nonprofit NCB Capital Impact board as a volunteer," he said this week. "On that board, I have never voted on any of the deals that Brighter Choice Foundation has been a party to."
Albany is exhibit A in the web of potential conflicts that keep popping up in the charter school movement. It's one reason the state Legislature should refuse to lift the current cap on charter schools unless it also adopts stringent new government auditing rules.
If wealthy investors and banks can double their money simply by building charter schools, taxpayers deserve to know exactly who arranged those deals, who will benefit and what they will ultimately cost each school.

Now if these underattended schools were in NYC or Chicago their neo-liberal mayors would have them on the closing block. But look how the double standards kick in when it's a charter nobody wants to attend.

Skyrocketing costs, tax breaks, JP Morgan Chase $325 million pool, NCB Capital Impact, conflicts of interest, no oversight, etc. etc. ad nauseam. Does any of this sound like it has a remote connection to quality public education? Yeah and isn't that the whole point after all.

And just for fun here's a letter to the editor I came across in The Economist from a reader in North Carolina. Funny how so many of us get it but the politicians and the billionaires have insulated themselves from the world we live in :


SIR – Charter schools have been successful, but not for the reasons you suggest (“Chartering a better course”, July 7th). Their success comes mostly from the fact that they are selective and may refuse admittance to children with physical or mental issues, including those who have gone through an Independent Education Programme to provide extra help with school work or behavioural issues. Public schools, on the other hand, admit every child that comes through the door regardless of their abilities, including the ability to understand English.

Charter schools select their students, take municipal funds equal to the cost of public-school costs, and are, with very few exceptions, operated as companies for profit. Don’t think that charter schools are in it for the love; they are there for the money.

Is Teach for America Failing? by a TFA alumnus

Charter Schools, the Great Scam of Our Time

The Myth of Charter Schools