It's Nice to be Nice 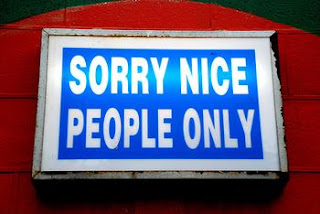 Someone on the Buffalo News Live Blog of the Board meeting was throwing high and inside at everyone, I mean head hunting. The name  he used used was Open Up the Process. Toward the end of the thing someone articulately named jEAN declared it to be me, calling me out by my government name then proceeding to ask if I have ever had a good thing to say in my life. Hmmm, well. jEAN, I will give it some thought and get back to you. I did say some nice things about Amber Dixon the other day and several times before that. I think I also wanted to thank John Licata for commenting the other day and informing me that Ms. Dixon only suspended travel for district employees and really lacked the juice to ground the Sister's Food and Travel Club. I appreciate that he too did not vote in lockstep with the others to approve the new Superintendent. He strikes me as someone trying to cling to some credibility in the role of Eddie Albert in Green Acres where it seems nearly everyone around him is completely insane. O.k. that's a few nice things. Gosh I feel better all ready.
Posted by Unknown at 7:04 PM