Charter Schools 101 C Shock and Awe, Bait and Switch and Sleight of Hand

As long as we're talking about Louisiana, its charters expelling girls who test positive on a pregnancy test or refuse to take one, along with You Know Better Piyush Jindall's advocacy for Creationism, here's the boiler plate plan the Corporate "reformers" planned to use to create a handful of Stepford Schools they could point to and say Look, here's our better product. And as we discussed Shock and Awe in two earlier posts here we go again, but this time it's right out of the textbook and even Arne Duncan the poor dope is gulled into calling it a miracle. It's NOT a miracle. It's a mirage and it's the same game everywhere you look. 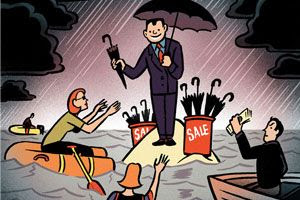 The national media consensus is that New Orleans has discovered the miracle cure for urban education.  Their conclusion is largely drawn from data provided by the Louisiana Department of Education, which obviously has a vested interest in emphasizing the good and ignoring the bad in the post-Katrina education changes.  New Orleans is important in the national education debate, but not for the reasons we commonly hear; it is important because it is the beachhead for a national movement to remove schools from local democratic control and accountability.  The privatization trade-off is that the public sacrifices control of schools for a privatized system that delivers better education for the same tax dollar.  While the citizens of New Orleans certainly lost control of their schools, it cannot be said that they have received a better education, if that also means an equitable education, nor can it be said that it came at the same cost.
The corporate education forces that advocate a free-market business model have developed a “beachhead” strategy in New Orleans.  Taking advantage of the evacuation of 90% of the population after Katrina, they set in motion educational changes that bypassed the elected school board and destroyed virtually all local democracy and accountability.  They hoped to use New Orleans as a showcase for a model school system they could imposed throughout the nation; one based on privatizing public schools into charter schools and shifting dependence from veteran teachers to temporary and inexperienced Teach For America (TFA) recruits.
At the heart of the beachhead strategy was a quiet policy of subsidizing select charter schools to provide them with additional instructional resources and incentives to ensure increases in high-stakes test scores.  But the flaw in the subsidy system was that the showcase model “successful schools” could not possibly be replicated on existing revenues throughout the district let alone throughout the nation.  The corporations and foundations had only enough funds to bankroll a display system in one city—not in 50,000 schools nationwide.
From the outside, it appeared that the charters and TFA have “done more with less” when in fact—if they did more at all—it was through massive subsidies from the state, corporations, and foundations, all largely concealed from the public.

And anyone who thinks this bunch is Buffalo calling themselves The Chameleon Group has The Children as their priority must still be waiting for Kelly and Andre to bring home a Superbowl trophy. Not happenin' folks.
Posted by Unknown at 10:06 PM