After all the times I had to blog about this guy I guess it's only fair to have the last word on his pointless and failed tenure as a member of the Buffalo Board of Ed. I searched his name in the upper right corner of this very blog and the results were a stumble down memory alley I'd just as soon forget. Carl trying to ram his handpicked Superintendents into place and failing. Carl's fake black friend "Herman" on Facebook sounding suspiciously like Uncle Ruckus of Boondocks fame. Carl cursing out a reporter and Carl's tropically shirted goon looking like a stray cast member of a community theatre production of South Pacific as he shoulders said reporter out of the way. Carl's friend Sandy Beach lisping about Austin Harrig implying that Paladino's 18 year old opponent in the race for the Park District seat had some kind of masculinity issues. Very classy stuff that, a fat old man in his 60's using his right wing radio mic to ridicule and belittle a teen ager who dared to run for office against his millionaire developer pal.

Who can forget this gem from the Carl email dump unleashed by WNYMedia.net during the ill fated Carl for Gubner run? More class. What's funnier than starving people in a developing country fleeing for their lives from a relief plane bringing them food and medicine? 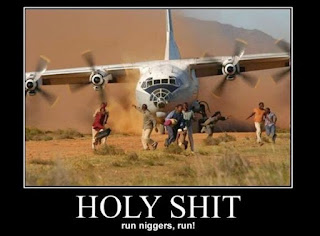 I could go on. Seriously I could... for pages. But really folks who wants to sift through a sewer of such hateful mean spirited garbage. I can't help but think of Al Capone ending up on The Rock because Elliot Ness went through his taxes. Not for bootlegging or bomb throwing or roughing people up and or deep sixing them but for freaking tax evasion. Before anyone calls the Lake Erie Italian Club to report me for besmirching a fellow paisan let me say ethnicity here is merely coincidental. While the obvious ways to get Capone seemed to end up stifled by threats or bribes or a curious lack of evidence in every case, the Feds put their thinking caps on and said forget all that. They went for something just as illegal yet not quite as sexy. Instead they pinched him for not paying the tax man. While the protests that blew up Board meeting after Board meeting centered around the outrageously hateful and racist remarks published in Artvoice, everyone kind of knew the First Amendment would protect Paladino even as a sitting board member from removal. So they got him for violating the rules of Executive Session and sharing confidential details with people who had no business hearing them. A little like bringing in Elliot Ness to rifle through the books and find the smoking tax return that would bring about the check mate and the end game of Carl's disastrous participation in public life.*

*In spite of the Enron like decline of Trump's brand and the trickle down effect it's likely to produce in Trump apologists like Carl Paladino, we've all heard that he's ruminating about yet another run at the Governor's office. Being removed from one elected office could actually work to Paladino's advantage in running for a higher office when you consider the angry white demographic whose heartfelt sense of manifest grievance he courts with his talk of coons in the basement and his baseball bat.

I'm not here to say he's your next Governor as much as I'm saying we best not snooze on this one. If you ever needed an example of addition by subtraction look no further than Carl Paladino's removal from the Buffalo Board of Ed. I'm not shedding any tears about the democratic process being sideswiped by Mary Ellen Elia either. I've seen this sentiment expressed in a few places elsewhere. The guy screwed up, was evaluated by his superior and found to be unfit to complete his elected term. Teachers these days get terminated all the time in the current climate of so called ed reform. Why should he get special treatment because he's Carl and for years Buffalo has excused him with "Oh that's just Carl being Carl." In the great big world it appears that excuse holds no water. Maybe for once Carl being Carl actually had some consequences. Enjoy the victory Buffalo, it's been a long time coming.
Posted by Unknown at 3:32 PM