A Speaker Quotes Dylan Roof at a Board of Ed Meeting in Buffalo? Seriously?

In Mean Girls, the audience had Damian to interrupt the dithering stranger at the microphone and rescue them from an insufferable litany of gibberish. Anyone unfortunate enough to get pinned down in Kathy Weppner's semi-automatic hail of stupid at a recent board meeting would have exulted in such an intervention. Likewise, the board meeting attendees who got caught in Mrs. Russ Thompson's drive-by fusillade of teabaggery -- where she actually quoted Charleston serial killer and braindead racist asshole D-bag Roof -- would likely have welcomed Damian from The Omen -- if only to shut her the fuck up.

Wait a minute here folks. Kathy Weppner? Jul Thompson? I thought we were talking about a Buffalo Board of Education meeting. And we were. Well why in seven holy hells are Weppner and Russ Thompson's Old Lady haunting such an event?  Do they have kids in the schools? Are they part of a parent group? Are they education people? Do they live in Buffalo? Well according to TeaPartyCheer, Weppner lives in Williamsville and her children are raised. As for Jul Thompson? Her husband is mentioned in several places as Grand Island Activist Russ Thompson. So they aren't from Buffalo nor do either of them have any kids in the schools so I guess we can only conclude that their attendance at Buffalo board of Ed meetings must be some kind of a show of solidarity with "Damn Asians" Board member, Carl Paladino.

Weppner and Paladino have something of a sibling from another mother thing going when it comes to making outrageously offensive and inexcusable remarks in public. Where Carl wrongly accuses "damn Asians" of stealing all the good college spots at UB, Weppner refers to Guatemalans as blackmailing "infected poors" coming here to do us harm and take away our jobs picking beans and lettuce for 12 hours a day 6 days a week for $8 something an hour like the guys I see out there at the end of my rural road every day and every night. 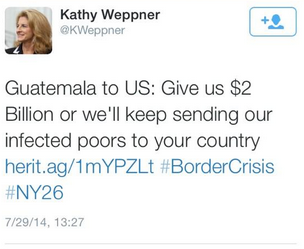 Now Mrs. Thompson is something of a dark horse working in the shadow of her tri-corner hatted, musket toting husband who likes to get himself up in colonial garb and explain how he's got no time for anyone's shit. He was Carl's "driver" during the horse-porn Campaign for Governor and was lurking in the wings trading barbs with a local veteran's group guy the day Carl committed his infamous "Damn Asians" gaffe. The following is taken from the original Olean Times Herald:

Russ Thompson of Tea New York, warmed the crowd up for Paladino, outlining how six Upstate Republican senators including Young, “threw us under the bus” by naming Flanagan majority leader to succeed Skelos.
Thompson got into a verbal scuffle with Mark Williams, the county American Legion commander, who was carrying a sign supporting Young.
Thompson made reference to Williams circling the park with the Young sign, at which time Williams, the county’s public defender, walked toward the gazebo waving his sign and saying he was a veteran.
Thompson thanked Williams for his service and asked him to keep walking.


Classy stuff that, showing up in Olean to protest Kathy Young and telling a local guy who supports her to keep walking. That this is his town and he's the American Legion Commander apparently don't count for much in Planet Teabag. The convoluted and outrageously patronizing screed unleashed upon the unwary attendees of the Board meeting is so obnoxious and just plain fucking dumb I won't even reprint it. I won't even link to it but I'll repeat that she quoted Dylan Roof the Charleston shooter and actually tried to paint him in a reasonable light. She concluded by enjoining black people to be forgiving any time a white person takes a shot at them or a shit on them. You know, like those great ladies in Charleston did...

I don't get to enough Board Meetings. And unless your name is Myke, Kristen, Mel, Eve, Larry, Dino or Pat, chances are you don't either. Promise me you'll go and promise me you'll keep and eye out for these two Wyrd Sisters when it's time for the public comments. A steady stream of "She Doesn't Even Go Heres" from the rest of the house is the least we can do for these party crashers who think they can show up anywhere saying and doing any damned thing they please. They represent the worst of Western New York and the worst of the Buffalo Board of Education. They need to know we noticed and that they're not welcome.
Posted by Unknown at 10:25 PM