Charter School Untruths and the Prevaricating Prevaricators Who Tell Them 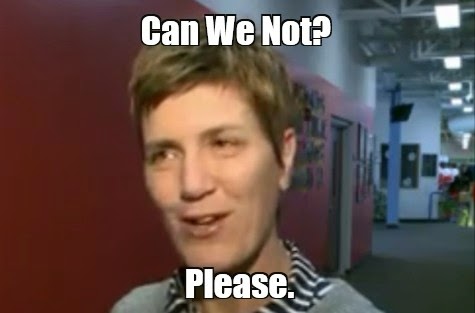 After Kevin Gibson finished mopping the floor with the "Tapestry Is a High Performing Charter" lie at last week's board meeting, you'd think the heads of state over at Tapestry might stow the bullshit wand for a week or two and lay low. Ahhh but to think that for a second would be folly as you'll see in the WGRZ video of Tapestry and Buffalo ReformEd's confederacy of reformers who gathered to hear from Parent Revolution operatives on the use of  trigger laws among other reformy data bits. Local Grande Dame of Ed Reform and Homeroom Mother of All Charters, Mrs. Friedman, who surely loves her country and her family as well, does more than her fair share for the charter cause locally. If you recall, she and Donn Esmonde's undisclosed Florida realty venture partner Steven Polowitz  led the Chameleon Group's Bay of Pigslike takeover attempt of East and Waterfront a few moons ago.  In this video our educational dilettante manages to say without any whiff of irony and what appears to be a perfectly straight face "...We don't have the money the unions have..." At this point I yell CUT! and jam my index finger against the screen of the ipad slamming this farce into PARK before it even gets started.

Have you ever heard this Astroturfed line of reformer bullshit before -- that the ed reformer Brahmin don't have the money the unions have? Sudra Please. I looked into "Parent Revolution" you know, another of those "just folks" and "gee whiz" "let's play spin the bottle in your parent's bomb shelter" kinda groups. Oh yeah they're nothing but grassroots and varsity sweaters all the way these gals and fellas, you betcha. Yeah they might be that. Or they might be another fakeass bunch of shameless hack mercenaries.

"Grass roots" groups are relatively unfinanced and spontaneously constructed in a pivotal moment -- like the loosely constructed amalgam of teachers, students, parents, PUSH and BPTO members who've been raining holy hellfire down on the Board of Ed these past few weeks. Grass roots groups meet at someone's house and count on Dino to make thousands of phonecalls. They don't even have any cool t-shirts fer chrissakes.

"Astroturf" groups like the murder of ed reform crows at Parent Revolution's home office pretend to be grass roots and try excruciatingly hard to pass themselves off as legit, concerned and all about the cause which in this case is "the children." Astroturf groups can afford to fly their Dukes and Dauphins of the Ed Reform Sideshow across the country for a weekend to speak to fewer people than Jesus had at The Last Supper. Count the heads in the video if you think I jest. Here's a little follow up on Parent Revolution that you'll never get from the Tapestry crew:


At first glance, it is one of the nation’s hottest new education-reform movements, a seemingly populist crusade to empower poor parents and fix failing public schools. But a closer examination reveals that the “parent-trigger” movement is being heavily financed by the conservative Walton Family Foundation, one of the nation’s largest and most strident anti-union organizations, a Frying Pan News investigation has shown.
Since 2009, the foundation has poured more than $6.3 million into Parent Revolution, a Los Angeles advocacy group that is in the forefront of the parent-trigger campaign in California and the nation. Its heavy reliance on Walton money, critics say, raises questions about the independence of Parent Revolution and the intentions of the Walton Family Foundation.
While Parent Revolution identifies the Walton Family Foundation as one of several donors on its Web site, the full extent of contributions from the Walton foundation and other donors hasn’t been publicly known until now. Information supplied to Frying Pan News by Parent Revolution and publicly available tax records show that a total of 18 separate foundations have given more than $14.8 million to the group since its founding in 2009.
Other multimillion dollar contributors include the Bill & Melinda Gates Foundation ($1.6 million); the Laura and John Arnold Foundation ($1.5 million); the Wasserman Foundation($1.5 million); the Broad Foundation($1.45 million) and the Emerson Collective Education Fund ($1.2 million), founded by Laurence Powell Jobs, the widow of former Apple CEO Steve Jobs.
But the Walton Family Foundation is by far Parent Revolution’s largest benefactor, contributing 43 percent of the $14.9 million total.
“Why is all this money coming in?” asks John Rogers, director of UCLA’s Institute for Democracy, Education and Access, who has studied the parent-trigger movement. “Itdoesn’t seem to be about educational improvements . . . It seems to be about creating greater pressure to challenge teachers’ unions rather than an authentic way to improve education opportunities.” The parent-trigger law diminishes the influence of teachers’ unions and it allows public schools to be turned into nonunion charters.

So the poor little Parent Power folks and their poor little charter pals here in B-Lo aren't as poor as they'd like to pretend they are. With The Waltons, Bill Gates and Eli Broad in their wallet for starters you'd be hard pressed to make it onto the free or reduced lunch list as a Parent Revolutionary. I hate to repeat myself, especially when I'm reminded of it by students and my own kids, but let me ask the age old ed reform/charter question one more time: If the ed reform movement is so noble and charters are so gritty, rigorous and excellent, why do the people connected to them have to tell so goddamned many lies? The truth will set you free my friends and even if it doesn't, it's some nasty bitter grounds in the latte' of our amusing friends from the Ed Reform class.