The $64,000 Question. Why Does Board President James Sampson Not Crave Accountability for Himself Too? 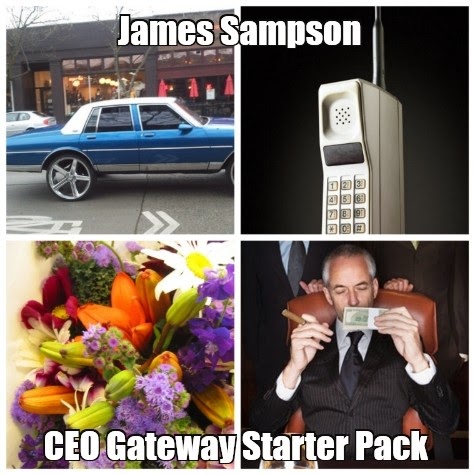 Wednesday's Board of Education meeting was something of a coming out party if you will for one of Western New York's heretofore closeted corporate welfare queens, Buffalo Board of Education President James Sampson. The Buffalo News printed an article Tuesday that revealed a state audit had discovered some irregularities ,if you will, in the use of public funds by Mr. Sampson while he was CEO at Gateway Longview, a service provider to Buffalo Schools.  Here is some of what Mr. Sampson tracked into Buffalo's carpets on his Gateway shoes:


Expenses included food, flowers, cellphones and a $600-a-month car allowance for former Chief Executive Officer James Sampson, who is now president of the Buffalo Board of Education. Sampson also received other perks, including memberships at local social clubs... Auditors also found $378,946 in other questionable expenses, including food, flowers and personal expenses for staff. Of that amount, $39,138 was for Sampson’s car and cellphone allowances while he was CEO, expenses which the audit says were “inappropriate.” Other Gateway officials received perks totalling $24,972.

State Comptroller Thomas DiNapoli offered Sampson and his fellow CWQ's a hearty tongue lashing in a separate statement : “Special-education providers play a crucial role in our education system, but some unscrupulous contractors have taken advantage of lax oversight to game the system, rip off children and taxpayers, and line their own pockets,” he said.

Unscrupulous contractors gaming the system, ripping off children and taxpayers, lining their own pockets.  Owch. Say it aint so Jim.

Enquiring minds want to know and one Mr. Michael Ziolkowski, a Buffalo resident speaking during the public comment segment of the board meeting asked Sampson pointedly to explain himself.         " Sixty Four thousand for a social club?" Ziolkowski can be heard asking Sampson  incredulously in the ever terrible audio from the meeting. Rather than answer Ziolkowski's inquiry Sampson cuts him off abruptly saying repeatedly "you're done." Audience members can be heard howling their objections of "let him talk!" Sampson lamely adds, "You're not talking about board business, you're done."

Come with me if you will to a kinder gentler time before "Jim's"unwilling exposure as yet another rich guy gripping the public teat to keep himself in exclusive club memberships, a sweet ride and lots of Feng Shui-rrific fresh cut flowers. Really? Third poorest city in the Milky Way and James Sampson is bathing in tiger lilies?  Shortly after he was elected to the Board, Sampson sat down in an Elmwood Village coffee shop (where else?) with charter school cheerleader and semi retired Buffalo News hack Donn Esmonde for yet another hagiography of a wildly wealthy 60 something white ed reformer. His profile in courage of Steve Polowitz of Chameleons Inc. blew up in his face when it was revealed that Steve and Donn own an income property together in Florida but Donny neglected to disclose that item as he painted his heroic mural of Polowitz the poor little lawyer taking on BTF and its glue horsed front office. In the latest Profile in Charter Courage Donn actually told us "Sampson aches to inject accountability into a broken bureaucracy." He aches all right.

Esmonde further adds of Sampson "He aims to crack the district’s petrified, closed-door, anti-democratic culture...demanding the district treat kids and parents like house guests instead of gate-crashers." Sampson for his part explains the maladies of his predecessors on the Board:

“They’re hostile to the people they are accountable to. A culture of complacency developed over time.”


So "Accountability Jim" is here to tell us about the foibles of previous board members as Donn canonizes,  fawns and polishes his Florsheims. When Ziolkowski hit him with the $64,000 Question Sampson slammed that petrified, closed-door, anti-democratic door hard in his face. If shutting a guy down because his question shines the light on your shady and "inappropriate" use of public funds in a previous incarnation isn't "hostile to the people you are accountable to" I invite Accountability Jim to step the fuck up and explain just exactly what it is. I was curious about Sampson's ad hoc explanation for having Michael Ziolkowski bum rushed by district security officers. He claimed the guy wasn't talking about board business and that is grounds for the heave ho. Odd. The policy outlined on Buffalo Schools website mentions nothing about speakers adhering to any script. Here is what it does say:

The Board welcomes speakers to sign up to speak at all board meetings. Please be reminded that all speakers’ remarks must be limited to three minutes or less. We ask that speakers be mindful that this is a business meeting, open to the public and televised locally. Attendees and viewers include persons from throughout Western New York, including children.

This Board asks that speakers conduct themselves professionally and that their comments remain civil and courteous, bearing in mind that they will be heard by people of all ages. This is an opportunity for Buffalo’s residents to address the BBOE about issues that serve the public interest and District mission, and the Board asks that speakers demonstrate appropriate decorum.

See anything in there about not asking the Corporate Welfare Queen Board President to explain why he gamed the Buffalo Schools for all that cash? Yeah, me either. If James Sampson thinks he's going to "run it like a business" with him as the CEO I have some advice for him. Fasten your non-subsidized seatbelt Jimbo cause you're in for a bumpy ride. Remember what you told Ziolkowski about being done too. Stranger things have happened in this school system brother. And when you get your turn at being hauled away by security don't sweat it.  We'll gladly pony up for your going away bouquet.
Posted by Unknown at 8:03 PM