Could NYSUT Suck Any Worse?

Hey kids it's Vote Cope season in case you didn't get an email or a text message. And here's a handy suggestion for how much you should donate: Take the first two numbers of your annual salary and add a zero to them. So if you make $550,000.00 like AFT President Randi Weingarten does just send Vote Cope a check for $550.00. Why would I donate to something that sounds like a pain reliever for the election season? you might ask. Well, if you do you can claim your little piece of the brilliant strategery our bright bulbs at NYSUT's political wing are cranking out. Here's a sample: 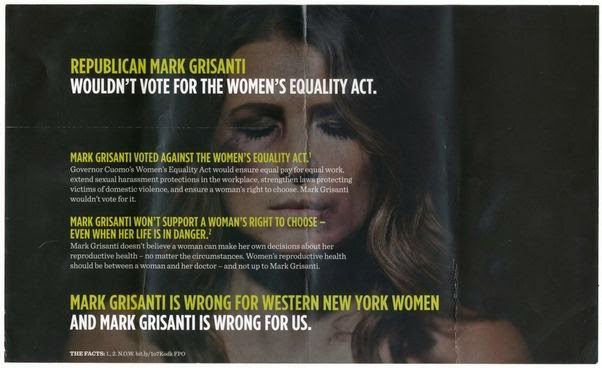 I know you'd like to feel special that NYSUT took the time to smear a local hack whose reputation includes switching sides and parties more often than an Afghan warlord not to mention that embarrassing brawl he provoked trying to stick his nose into an argument between two Native Americans in the Seneca Niagara Casino. Ahh but don't get too carried away Western New Yorkers, NYSUT isn't that into you. The Mensa members of NYSUT's New York Post JV team used the same ad against two other candidates downstate Republican Sue Serino and Republican Terrance Murphy. I wonder if Sue and Terrance are polling better than Grisanti whose Republican endorsement was yanked in a primary by a self financed lawyer guy who goes door to door dressed like a character out of an F. Scot Fitzgerald novel, one Kevin Stocker. The overkill employed against Grisanti is vile enough on its own demerits. To imply that he'd blithely stand by checking his email and Facebook via iphone while battered women crawled at his feet pleading for help is the stuff of mudslinging with broken glass in the mud.

And the real payoff comes when the Buffalo News and everyone else who's looking for a cheap shot at teachers gets hold of the ad, finds local Democrats like County Executive, Mark Poloncarz to denounce it for the rot that it is. This was his reaction to the flier Thursday morning on Twitter:

“Came home from debate to find this in the mail. Horrible. This makes people hate politics. Vote-Cope should be embarrassed.” ( I saw him at the debate sitting next to Kathy Hochul and Mayor Byron Squarepants).

Marc Panepinto, who has a  2000 conviction for voter fraud involving invalid signatures is the Democratic Party candidate to whom NYSUT is funneling hundreds of thousands of Vote Cope dollars this cycle. According to the Buffalo News, "Panepinto’s campaign said that it has nothing to do with the flier but did not take issue with it." “Our campaign has nothing to do with independent expenditures, including this shameful mailer,” said campaign spokesman Conor C. McMahon. “But it’s clear that Grisanti’s ultraconservative opposition to women’s equality is out of step with Western New York voters.”

So they admit it's shameful, deny and any association with it but try to piggyback a free plug in making a follow up statement that actually elaborates on the message they just referred to as "shameful."

In case the Fullbright Fellows of Vote Cope aren't aware, Buffalo Schools are currently under siege from nearly every corner of the globe. The Buffalo Board of Ed is now run by a majority of wealthy white men with friends in the charter school business. The titular head of the parent group in Buffalo just co-authored a letter to the editor clamoring for more of the wealthy white mens' agenda, more charters, more closings, more teacher and union bashing. Board member Carl Paladino was recently heard explaining his educational philosophy to a group of Erie County businessmen in the following terms:

By no coincidence school closer, charter promoter, non educator "Education Expert" Dr. Terry Ross is coming to Buffalo to share his vision of closed schools, high graduation rates through attrition and mandatory entrance exams to anyone willing to show up at Waterfront School on a Friday night or Saturday morning in December. It's been said Eva Moskowitz is looking to gain a foothold for her despicable "Success Academies" here. In short, the few of us left who get it and are willing to fight find ourselves in something of an Alamo situation.

One might expect given the current climate, with teachers in desperate need of all the friends we can find that our state union would refrain from doing something so egregious, so completely stupid and reckless that the average jerk on the street would be hard pressed to disagree when The Buffalo News unloads in one of their trademark teacher bashing editorials under the headline:

Teachers Should Be Ashamed of Union's Unseemly Efforts to Unseat Grisanti followed by "...it is rare that Western New Yorkers are subjected to a campaign as vile and devious as the one leaving its trail in the 3 way race to represent the 60th Senate district and driving the dishonest and distorted contest are New York's school teachers or more specifically New York State United Teachers the largest of the state's teacher unions."

A friend the other day made what I took to be a darkly comic remark when he said it. I am now re-thinking the comedy end of it and looking at the possibility that he is onto something. Do you ever wonder, he asked, if Buffalo is being offered up as a sacrifice?  Now I am not one for conspiracy theories and I have always gritted my teeth when the end of the bar gasbags pronounce all unions to be corrupt and in league with the powers they are supposed to be doing battle with. It's getting harder and harder to argue with these kinds of gasbags when even the Buffalo News is able to pimpsmack teachers then qualify it later by saying "Oh, we meant their union, not them" it's pretty hard to see where my union has my best interests at heart. Their motives are their own and they operate in a thick layer of insulation from anyone I know. Call me conspiracy theorist, call me "divisive" as they do any time you object to Mulgrew or Weingarten's self serving hijinx. Just call me in a really loud voice cause my tinfoil hat is going to have some gigantic earflaps. This is Buffalo, it gets cold here.