Since the Common Core has put a full court press on kids, teachers and administrators I have heard the question raised more than a few times? Why aren't more people fighting back against a developmentally inappropriate conglomeration of ill conceived horseshit that's crushing the souls of both kids and teachers and turning school into a place nobody loves and nobody wants to go to? One teacher in New York is fighting back and the results are wholly predictable.  Craig Charvat is a Social Studies teacher at Center Moriches High School in Suffolk County, New York. Like a lot of teachers he's been watching the "roll out" of the Common Core Standards in their Cuomo-accelerated form with a wary eye. As an experienced teacher Mr. Charvat saw the Common Core as the snakeoil that it is, crafted by non educators, financed by billionaires not to edify kids but to redirect even more of this country's sizeable education budget away from kids and into the pockets of a handful of well placed, well funded oligarchs. Craig saw bullshit and refused to call it fertilizer. I might add at this point Mr. Charvat is also a self proclaimed member of New York BATS, an association of teaching professionals who vow to suffer no fools in the fight to protect Public Education from being usurped by greedy know nothings whose means do not justify their means or their ends.  When a media outlet offered to interview Mr. Charvat allowing him to call it as he sees it and vent some of his disgust with the new "direction" education is taking, he jumped on it and laid it out as he sees it. Needless to say a handful of people with priorities other than the quality of education and the sanity of teachers were less than thrilled with Mr. Charvat's actions. This is the point where so many folks simply bow out and say "Naaah, it's not going to be worth it. I'll speak my piece and then pay for it in spades." And truth be told, it's a valid consideration for many of us who chose this career in part for the security it once offered even if the pay might be less than other careers.  As fortune would have it Mr. Charvat decided to speak his mind and let the chips fall where they may. And since he spoke to Newsday last Tuesday he has been called to the Principal's office 3 times. In his first 15 years of teaching he's never been called once? Coincidence, you say... 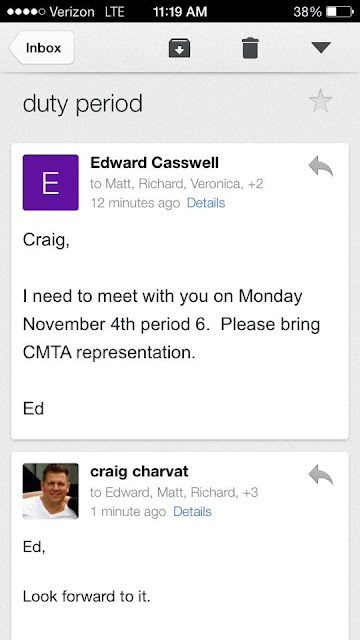 At this point I can share the sensation of speaking out and walking into school with no idea the story ever ran until a rather daft and giddy teacher aide put her hand over her mouth and said "Oooooh I would use the other hallway if I was you..." "Why is that?"  I inquired, thinking at the time that the reporter had killed the story since we talked about 3 weeks ago and I'd never heard anything more about it. "Guess you didn't see the front page," she said, killing herself with Schadenfreudean glee. "No, I didn't why?" I asked beginning to realize what she was talking about. "Well you're on it, you and a big pic of Little Joe the biter sitting with his mom at their kitchen table on suspension."  "Oh, that," I croaked. Not much you can do about it at this point I thought so I kept right on walking and as I reached the Principal, a feckless scatterbrain and a coward who'd been placed there because it was such a good school even she couldn't screw it up, I asked her brazenly and with a big smile "So what time is my observation?" "Don't even talk to me," she hissed and waved me away with a flap- of her hand as she spun toward the wall to avoid looking at me. Wow, how professional I thought, but it was consistent with everything else she'd ever done. The facts were that the district had entire classes of severely disturbed kids sitting in 6:1:1 Behavior focus classes. Kids who should have been in residential or at very least a therapeutic day school. They were throwing chairs at each other, kicking each other, biting each other and trashing classrooms and the Main Office. They were a group of third and fourth grade boys who were dead set on killing each other no matter how many tokens they earned, computer time they were awarded, fun Fridays, walks to the courtyard and God knows what all else. Teaching lasted about 12 minutes per interval on a good day before someone fell out. Well instead of spending the money and getting these kids where they belonged, the district was running a stall game on us. In the meantime all hell was breaking loose with my little Lord of the Mosquitoes 6:1:1 class. So when my union rep asked if I would talk to the reporter I said sure. Fortunately for me the Principal was mostly upset that she got a 5:45 wakeup call from a City Hall lackey bawling her out for letting one of her teachers talk to the news. She lacked the courage and conviction to come after me and a month later she read in the same paper she was being transferred and retired instead. Two weeks after that 4 of the 6 kids were placed in the appropriate settings. Objective attained.


Craig's Principal however is 5 years away from his Arizona retirement and has no intentions of "being dragged through the mud," to use his own words. I am not sure which mud he means when he uses this metaphor. Does he mean the mud of having a courageous teacher who stuck his neck out publicly and spoke an obvious truth to a dubious power, namely that Common Core sucks and everyone knows it but somehow the money and politicians behind it seem to think they can keep marching their naked emperor through our schools and nobody is going to notice or speak up about it? My own case was so much more cut and dried and such a locally contained issue. There were no billionaires standing behind the hacks who were asleep at the placement switch and I never really had much to fear from an administrator downtown despised and backhanded at every turn. Craig Charvat is in a far more precarious position than I ever was. His fix isn't as simple and his Principal has chosen the cowardly path of trying to throw the whistleblower under the bus. It's a very trendy path in the Obama administration and since the Common Core is Obama and Arne Duncan's two headed love child maybe it's only fitting that yet another whistleblower gets tossed between the axles of "the cheese" as my city kids call orange school buses.  Principal Ed Casswell in his message on the school website describes the school as having "an atmosphere of disciplined freedom." I guess in Craig Chavat's case Mr. Casswell believes Craig should be disciplined for his freedom. We all have choices every day, some hard ones some easy ones. Craig Chavet made the hard choice to speak the truth about Common Core's destructive effects on education. Ed Casswell chose to attack Craig for his courage rather than stand by him and support him for his courage. Now he has to face the consequences of making the cowardly choice. And as if the gods of the karmic bitchslap hadn't all ready peppered poor Ed with a few hundred emails and tweets all ready, this gem pops up on the internet about the same time Craig Charvat is being lectured on the appropriate procedures for performing hall duty :


This video of Ed Casswell pimping an SAT Prep Test Company's Product from his public school office, possibly on school time is simply too much to bear. Should a guy silly enough to let this get out into the public domain really be hauling veteran teachers into his office to go over the X's and O's of Hall Duty? Damn, Ed. this one hurts. And if you think the karmic pixie is out of dust, guess again. Guess whose signature appears on the Principal's letter to parents against excessive testing? Craig reports that he asked Ed Casswell why he signed it but the response was undistinguishable. Just when you go to make an example of somebody they turn the tables and end up pansting you instead. Aint education grand like that though?
Posted by Unknown at 10:58 PM