All good things come to an end as we know but the John King as Community Pinata Tour was almost too good to be true from the get go. The outrageous assumption that this feckless charter school hack was going to flit around the Empire State settling the hash of Common Core detractors with a wave of his scepter and imperious demands for quiet from the assembled proles is an assumption only a completely delusion human would ever make.

Only someone as delusional as this guy... 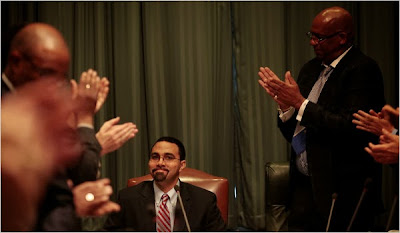 ...Who has obviously spent too much time being applauded and atta boyed and generally fed some really wacked out shit about what a great young fellow he is and how smart he is by a bunch of old bald dudes with liver spots and dentures.  If you look carefully at that corny smirk you will see glimmers of an amazingly vast pool of arrogance, one that clouded over and raged into a perfect storm under pressures most of us have come to handle routinely in the course of managing unruly rambunctious kids. Difference is we like those kids, love them even. King's contempt for the assembled humanity in those rooms couldn't have been any more transparent. The little Commissioner Who Can't thought he was going to school teachers and parents and anyone else who dared to challenge the corporate mandates of Pearson, Gates and Bloomberg. The guy honestly believed his mission on these Clown Hall meetings was one of silencing dissenters and shaming anyone who challenged his eminence. His disdain for opposing views was manifest.

John King got a biaatch slap from the world the rest of us live in when he stepped to the podium and demanded quiet. He was told to sit down. He was told it's not your turn to talk. He was told he all ready had his turn and to sit down and be quiet. He was challenged for sending his kids to a private Montessori school. His connections to Pearson were thrown in his face. His defense of Common Core and Standardized testing were ridiculed. John King's total absence of empathy for anyone else in the assemblage came to the fore as he tried nay insisted on stealing time from speakers to rationalize sending his kids to a private Montessori school. He even threatened that the "discussion" would not continue until he was allowed to use the audience speaker's time to justify his obvious contradiction in policy and exercise in  hypocrisy.  It wasn't to enlighten anyone or forward the so called discussion, it was because they pissed him off and hurt his ego in ways it doesn't get hurt listening to people like Bob Bennett and Meryl Tisch blowing smoke up his arse. King has been something of a Boy in a Bubble, a lovable pet lamb to all the flatulent, shuffleboard playing Regents.  Seldom is heard a discouraging word and the skies are not cloudy all day in John King's little bubble. So it's easy to see why being told to STFU and sit your ass down came as something of a shock to the wunderkind of Charterville. While all the good old boys and Tisch have been living vicariously through King's premature coronation his head has swelled under the crown. He's absorbed their platitudes, their backslaps and the rest of their shite and now he actually believes he is Da Shit.

John King has really only been tipsy from the bottle of education reform a little longer than he's been inebriated by the fumes of The Regents. The guy is definitely fucked up though as his little window into the spot where the rest of us have a heart and soul has shown us. We see a similar pathology in professional athletes who are set aside and given a different set of rules around Grade 7 or 8 when someone figures out they can throw a ball or swing a bat. And we are baffled when they turn 23 and are arrested for gunning down a pal, then implicated in several other murders and their Mcmansion's security cam reveals yet more shocking evidence. We really shouldn't be shocked when young spoiled guys handed millions of dollars at a vulnerable age make horrifying choices especially when they've heard nothing but their own greatness in an echo chamber for the past 10 years or so. It makes sense when people are kept in a bubble and worshipped by their elders that they start to believe the hype and start behaving in a way that reflects their wrongheaded egoism. Take away the tats, the ripped physique and the millions and you still have a little guy in a goatee and glasses who thinks he too is above the rules of the rabble. Seems the rabble had a lesson he wasn't ever going to learn in his bubble. But instead of learning a valuable lesson, John King cancelled school and slithered back into his bubble where nobody is going to teach him anything he doesn't all ready know.
Posted by Unknown at 12:06 AM