A closer look at NYSED commissioner John King's ranting against Buffalo Schools and the completely hare brained scheme he's cooked up as a solution should prompt Gubner Andy to take a closer look at the boy wonder commissioner Steiner handed the sceptre to before parachuting into the lucrative edu-biz world. King is ordering Buffalo to make arrangements for the students of East High School and Lafayette ( where 70% of students are ESL students) to attend BOCES classes in the fall. Any moron knows the Buffalo kids won't be squeezed neatly into the vocational programming at BOCES nor will there be any core subject taught to them. No Core Subjects? What ? Where's the excellence, the special sauce, the college and career readiness Mr. King? 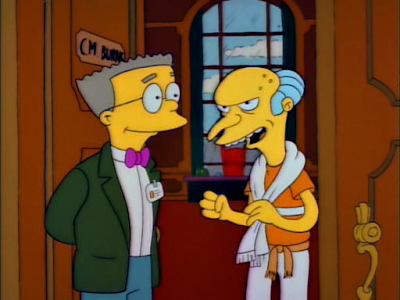 At this point in the real world Smithers leans inappropriately close to Mr. Burns and whispers 'Excuse me sir, but the kids you want to pass core subjects and score well on standardized tests aren't going to succeed in being college or career ready if you place them in a vocational setting with no instruction in English, Math, Science or Social Studies. Unfortunately, John King IS Smithers and there is no clone of him to whisper into his own ear and explain the bald faced dumbass mistake he is committing in his typical rookie teacher over reaction mode.

This is what rookies do. They get emotionally involved with their charges in all the wrong ways. They perceive non compliance as a personal attack, they retaliate by looking outward instead of recalibrating and looking inward at their own role in the failed exchange. They cook up dopey ill advised hamfisted plans for revenge that serve nobody and ultimately punish their students in wasted time and ineffective instruction. Instead of engaging the trouble makers who are really teaching them how to do their job and challenging them to grow, rookies like King seek ways to punish them and avoid dealing with them. In short Buffalo has been that pain in the ass smart kid who refuses to be bullied by someone who lacks the chops to bully anyone. And in his whopping one year career on public schools and his 2 years in a charter that led the list in suspensions and dropouts Mr. King never had his little bitty feet held to the fire by any of the tough kids we've all had to work with. No, instead he's been told what a bright young man he is by old men in suits and patted on the head by billionheiress dowagers like Meryl Tisch his old college classmate. And King believed them. Maybe if he'd been cussed out a few times or had kids explain to him that he's corny and needs to stop trying to be hard he might have learned a few things about how to manage people effectively. Sadly he's learned nothing and is just as "ineffective" now as he was the first day he wrote his name on the chalkboard and declared to the world that he was a "teacher."

King whines and hisses from his world of the removed in Albany making statements like the following :  “This is the first time that we have required an out-of-district opportunity for students,” King said, “but it’s clear, again, from [Distinguished Educator] Judy Elliott’s report and from the history of the last four years, that the district is simply incapable of providing a quality program there.”

In direct contrasts to King's alter reality also known as ReformerVision come the words of Charles Hiteshew, who heads up Johns Hopkins’ educational “talent development” program for middle and high schools. Hiteshew offered nothing but praise for the staffs and leadership at Lafayette and East.
“Those schools have been tremendous partners to work with,” he said.
Regarding the central administration, he said, “It’s bureaucracy, but it’s bureaucracy anywhere. There haven’t been structural issues we haven’t been able to work through.”
Nothing in his experience would suggest that the university could not successfully serve as the lead administrators of Lafayette and East next school year, he said.

Hmmm, sounds like maybe the Commissioner is talking out of his arse again and is so bent out of shape about the slide whistles, whoopie cushions and fake pukes sprung on him by those misbehaved people in B-Lo that he's just making shit up as they say on the twitter.  Keep it up Commissioner, keep running off at the mouth like the frustrated rookie you will always be and your boss will have no choice but to drop the "Ineffective" label on you. Cheer up though, I am certain your mentor Mr. Steiner can sneak you in somewhere as a data nerd and you can return to eating lunch alone with your numbers. People are way different than numbers Mr. King, but I guess you're kind of figuring that out these days aren't you?