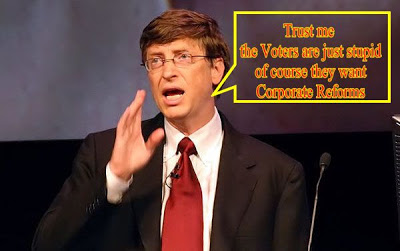 It appears the blowback against corporate privatization and for profit education is ON. From the great state of Washington teachers at Garfield High have formally refused to administer another useless standardized test that will once again be used to evaluate teachers, a purpose for which it was not created. And in nearby Ballard High, another Seattle school, teachers have announced that they will be joining their colleagues at Garfield in refusing to participate in the stupidity of administering a weaponized standardized testing instrument.

Closer to home, Hamburg NY teachers have likewise refused to sign off on the APPR mandated by the Ommissioner of NYSED with a $450,000.00 blackmail attached to it. The Superintendent and Board took their sweet old time in settling in for negotiations, an obvious ploy to limit the amount of time left for negotiations hoping to cash in on Mr. King's attempt to make teachers who stand up for themselves look like they are throwing away money meant "for the children." Hamburg's APPR left any final say on a disputed teacher evaluation  completely in the hands of the Super to break the tie. As professionals with a scrap of self respect should do, Hamburg teachers answered with a No in Thunder (nearly 75% of them voted it down).

And in a few days something tells me Buffalo teachers are going to find themselves alongside our brothers and sisters in Hamburg when push turns to shove and the lil Commissioner's ticking clock stops ticking without successfully bullying BTF into signing off on yet another a lousy deal that's intended to facilitate the widespread termination of teachers no matter what their skill level or expertise.
This is the future of ed reform in America friends. It's time David started to loosen up and gather up a few stones. Goliath has had it his way long enough.

Combine this with CTU's victory against Rahm Emanuel in Chicago and the ouster of charter shill Tony Bennett in Indiana. Add the steady gains being made in exposing the true agenda of these phoney ass venture philanthropists and their vulture educapitalism and I bet I could find a physics teacher who'd agree this looks like momentum.
Posted by Unknown at 1:21 AM