Attention Ed Reformers and Your Supporters Real or Imagined

Under "normal" circumstances one might find it absurd or at very least worthy of a good chuckle to see a message like this spray stenciled into the cinderblock wall of a  public Men's Room. It's a given that you don't piss in the sink unless you are the punchline to the joke about the main difference between "shanty" Irish and "lace curtain" Irish -- said difference being the "lace curtain" Micks take the dishes out of the sink before they piss in it. Sorry but it had to be told. So our paradigmatic fellow who has to take a leak likely has no cause to be overly mindful of the message's blunt admonition. He glances up at the stark red letters, snorts and asks himself Why the hell would I?
Ahh, but anyone who's ever experienced the Bud Light paddy of an NFL stadium men's room at halftime even here in the gentrified NIMBY pamby town of Orchard Park's Ralph Wilson Stadium needs no help from  Chomsky,  Jacobsen or Derridas to grasp the semiotics of these scarlet letters. If you've witnessed with all of your sentient powers, both the outrage and the normalcy of a hammered guy in a Talley #56 jersey engaged in the exact proscribed behavior denoted above you are able to process the entire message, bizarre as it may seem and explain in a matter of fact tone to the uninitiated. "Don't laugh, people do it every home game," you'll say.  In spite of $9.00 beer prices they still get bombed enough that it's far more expedient to throw one's upbringing out with the empty cup and piss in the sink than stand around waiting for half an hour to get within 5 feet of the proper receptacle.

Which brings me to our poor addled friends we call the EDReformers. I have no personal intel of them squatting in the ladies' room sinks or expelling their reform kool aid into the men's room sinks anywhere but it's not so much their habits of micturition as it is their intoxication that makes them behave as they do.
Having seen the results of their behavior while under the influence, "Tipsy from the bottle of reform" to paraphrase Dylan Thomas, we are right to ask that they refrain from doing the things they do while intoxicated, usually by their data. We have seen them make wild promises to get their way. They promise related services like counseling, speech, OT and PT to kids and parents and once they have what they need the clock begins to tick. And before long, reality unfolds itself like one of those little paper contraptions kids made in 7th grade to tell you that you'd end up married to Amy Kauffenbaugh with 9 kids and living in a tree house. The student gets no services and it seems he is not a "good fit" for PrimaBlanca Charter. Seems he has some emotional issues as well and he doesn't read so good, so he is "counseled out" and returned to a public school where he can be their problem and he won't hurt PBCS's standardized test scores. We KNOW they do this yet the continue like any addict or drunk to LIE and say that they don't. We have also seen them divide communities with outside help from heavily funded Foundations made up of a curiously 21st century demographic known as "Venture Philanthropists." People like Chicago's Eli Broad and Microsoft's Bill and Melinda Gates Foundation are only too happy to pump huge sums of cash into these self proclaimed "grassroots" posses which are Kentucky Blue if they are grass but more likely astroturf as they are unyielding, fake and cause a lot of injuries to people forced to play around them.
Bless Nancy Reagan's astrology addled little heart but I can't think of a better response to people like the "reformers" like our very own Chamelon Charter groupies here in B-lo who think they should be given control and possession of both Waterfront and East High School than her godawfully shortsighted and goofy 80's tagline of JUST SAY NO.  Forgive my redundancy if I have lately referenced this small bit of prose but look at the results of Eduformers writing under the toxic influence of the ed reform kool aid :  O-BAM-A! O-BAM-A! O-BAM-A!


I was fortunate enough to attend some of the Inauguration ceremonies and celebrations in Washington, D.C. last week. The mood in D.C. was one of energy, excitement, animation, and selflessness. Everyone had to wait on lines, and everyone had to smush into subways, but I never encountered a single impatient or rude person. Everyone was looking out for everybody else; we were truly a unified people.


That was Katie Campos writing on Democrats for Ed Reform as a "guest blogger" even though she has held a paid position with them before. She is also your NY State Assistant Secretary of Education, a nice made up title that serves to place a well connected know nothing about education reformer within spitting distance of the NYSED throne. She was given the task of writing the putrid teacher evaluations Commissioner King tried to foist on Buffalo's teachers but was told by leadership and the rank and file to piss off. Of course Campos' pals in the charters were and are still not going to be subjected to this same rigorous system. And that's because their true mission is to downgrade public education and its teachers making it easier to fire them and weaken their unions. This will soften up the turf for takeovers and the invitation to corporate backed privateers who run their precious charters to get their money grubbing hooks into education billions where they can produce a shitty product for a high fee and pocket a tidy profit. And in case we haven't tied up enough loose ends here folks, Democrats for Ed Reform, the group who enabled Katie Campos to bloviate in that highly heliumized prose is the same bunch of hedge funders (7 of their 11 board members are HFers) who plan to show the latest piece of Charter School Propaganda "Won't Back Down" at this year's Democratic National Convention hosted strangely enough in Charlotte North Carolina, an anti union Right to Work State. If you still have any doubts about the corporate influence of these "reformers" it bears mentioning that the Republican National Conference, if it doesn't get dragged out to sea by Tropical Storm Isaac, plans to screen this very same, factually challenged, corporate sponsored Lie of a movie at their funfest too. 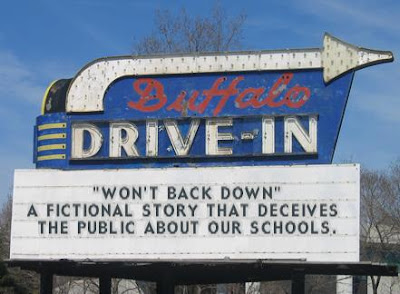 So, please reformers, we've seen your crappy results, (Only 1 in 5 charters does better than public schools) your obfuscations (Mr. Canada expelling an entire grade level whose test scores didn't reflect his excellence) your phoney concern for the inner city minority students (whom you avoid like the plague at Elmwood Village and Tapestry by demanding private transportation for your students) your vile sociopathic talking heads like disgraced cheater Michelle Rhee, your lousy, lying movies and your greedy corporate edulords who smell a profit and like so many of your administrators feel no compunctions whatsoever about leaving your boot prints on the backs of our students in your shameless career climb and money grab. Reformers : Don't urinate in the sink. Thank you.
Posted by Unknown at 3:08 AM